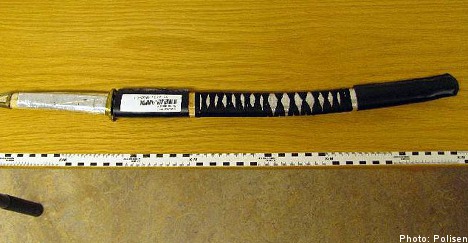 “I only did it to seem frightening,” said the man in an interrogation, according to daily Aftonbladet.

The 48-year-old man from the Baltic island of Gotland had been cat-sitting for a friend who was serving a prison sentence.

When the owner returned from jail in March this year, he soon managed to organize a place to live with another acquaintance and asked the 48-year-old to bring over his feline friends.

But during the meeting in the new flat, the 48-year-old fell out with the cat-owner over the animals and becoming increasingly agitated before he then stormed off, reports the paper.

However, shortly thereafter, he returned with a knife, with which he threatened his friend. The cat owner’s landlord tried to step in to diffuse the situation, but was subsequently threatened as well.

The man left, but returned the day after, this time armed with a samurai sword.

According to the friend, he stabbed the sword deep into the door and shouted that he would never get the cats.

At this point, the police was alerted and the sword-wielding cat enthusiast was apprehended shortly thereafter.

According to the paper, two witnesses said that the man continued making threats even after being overpowered by officers.

The man said that he had no recollection of this part of the drama, but claimed he had never meant to hurt anyone, just scare them a little.

“He never meant to get them with the blade. But he does admit to illegal threats,” the man’s defence lawyer Lars Dahlström told Aftonbladet.

Dahlström also added that the sword was not really like anything out of the Tarantino “Kill Bill” films, but rather a 200 kronor ($30) ornamental blade.

The 48-year-old has been charged with aggravated assault, illegal threats and vandalism. His trial will commence on April 16th in the Gotland District Court.