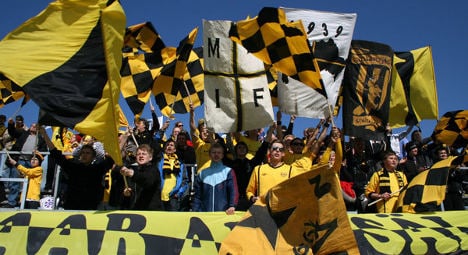 But the frost has nonetheless subsided throughout most of the country, making way for bicycles, sun worshipers, and – as of last weekend – football fans eager to welcome the start of the 2012 season of Sweden’s top professional league, the Allsvenskan.

Of course, Sweden’s top league may not garner the international recognition of the English Premier League or Spain’s La Liga.

But that doesn’t mean football fans who find themselves in Sweden can’t find an Allsvenskan club to support while at the same time cheering on teams they may have followed since childhood like Arsenal and Barcelona.

He didn’t know a thing about Swedish football, but after following some new-found friends to a match he was instantly hooked by what Sweden had to offer its football fans.

“I think the atmosphere here is even better than home games in the Premier League,” says Allen, who before moving to Sweden always had season tickets for his favourite club West Ham in England.

“A lot of Swedes have this image of English football being really great, but it can be quite stale. You’re not allowed to stand up in England, and here you can, especially if you’re in the klack,” he adds, referring to section in the stadium filled with active supporters, often represented by the teams’ official supporter clubs.

For Allen, Stockholm based club Djurgården, with teams in the highest divisions in both football and ice hockey, has been the perfect way to integrate with the Swedish society.

“Almost all of my friends, I’ve met them through football. If it wasn’t for football I might have actually moved back to England,” he says.

The warm welcome he received at his first game, the friendliness, and the family feeling has resulted in Allen never missing a game when Djurgården plays.

He explains how the supporter clubs go above and beyond to help their teams, and the intimacy which is built up within the organization is far nicer than the corporate feeling that he feels has infiltrated many English clubs.

“It sometimes feels like more of a brand over there,” he adds.

While Allen was attracted to Djurgården by the friendly atmosphere, Danne Wilhelmsson, chair of the Black Army, the supporter club for crosstown rivals AIK, thinks expat football fans should back his club because “it’s the biggest, loudest and best sports club in Sweden”.

For football fans looking to support a club that champions diversity, however, the main football club in Malmö in southern Sweden may be worth a look.

“Malmö as a city and Malmö FF as a football team both have a great mix of people from all around the world, and I see that as very positive,” says Magus Ericsson, chair of the Malmö FF supporter club.

“It provides a width and diversity that is quite uncommon in Sweden.”

And while Gothenburg has three teams in the Allsvenskan this season, Robin Carlander, chair of BK Häcken supporter club Getingarna (‘The Wasps’) says that footballer lovers in Sweden’s second city who cherish the game should consider his club.

“The team is for those who are interested in good football and not in what the kids at the school ground or grandma and grandpa support,” he tells The Local.

“It’s the alternative for those who prioritize content before packaging.”

What he on the other hand does recognize from matches in England is the passion that English fans are known for, which he feels the Swedish counterparts have adapted.

“Many countries have that I think,” Allen says.

“But it’s definitely its own thing here in Sweden.”

So whether or not your move to Sweden has left you feeling divorced from your favourite club from home, or you just feel that some football would enrich your time in Sweden, be sure to check out The Local’s list of reasons why you may want to adopt an Allsvenskan team as your own.