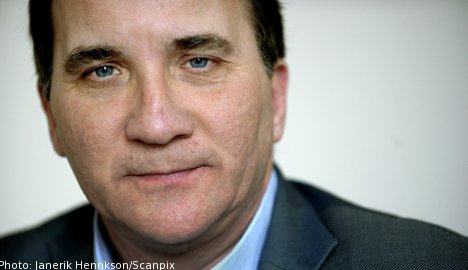 Asked which party they would vote for were an election to be held today, 34.1 percent plumped for the Social Democrats in Demoskop’s April poll.

The result put Stefan Löfven’s party ahead of the Moderates, with Prime Minister Fredrik Reinfeldt’s party dropping back three percentage points to 29.9 percent.

”This shows that we’ve managed to get our policy message out there in recent months,” party secretary Carin Jämtin told newspaper Expressen.

Stefan’s Löfven’s rising support has already made him the most popular Social Democratic leader since former Prime Minister Göran Persson hit his popularity peak in the early 2000s, according to the results of a separate poll.

In a Sifo survey published by Aftonbladet, 50 percent of respondents said they have a lot of confidence in Löfven, leader since late January of the party that ruled Sweden for seven decades with few interruptions until the four-party centre-right Alliance took power in 2006.

Moderate Party leader Reinfeldt remained at the top of the popularity pile, holding tight at 58 percent, the same level he recorded in the previous Sifo poll but much lower than the 72 percent support he enjoyed in 2010.