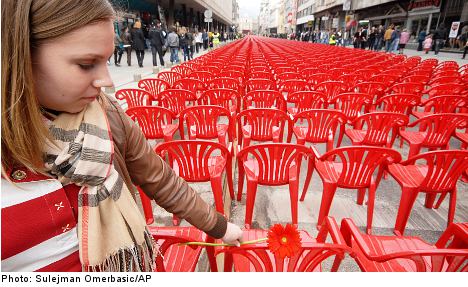 “It’s hurting us. We are Europeans and it’s hurting us,” French journalist and writer Florence Hartmann said, addressing Bildt, who attended a memorial concert for more than 10,000 victims killed in Sarajevo during the 44-month siege of Bosnia’s capital.

“I’m just asking why did he come, why is he coming today on the 6th? He should have come when he could have done something” to avoid the war, said Hartmann, according to a video released by the web portal www.Klix.ba.

From 1995 to 1997 he was also the first high representative of the international community after the signing of the Dayton peace accord that ended the conflict.

“When he could do something, he was saying that (late Yugoslav president Slobodan) Milosevic was a nice guy, and that is on the transcript. I’m sorry but he does not deserve to be here today,” she said, speaking in English.

Milosevic was considered by many one of the key culprits for the war due to his political and military support of the Bosnian Serbs.

Hartmann was joined by British colleague working with The Guardian, Ed Vulliamy, who said: “Everybody knows that for three long bloody years this slaughter was at best tolerated, at worst appeased by the diplomatic community and politicians.”

People involved in that process should not be in Sarajevo on the anniversary “unless if they are coming to apologise from the bottom of their hearts to the people of Bosnia and the ghosts of the dead,” he said.

Twenty years after the beginning of the war in Bosnia, thousands of Bosnians in Sarajevo Friday attended a concert before 11,541 empty chairs, each for a citizen killed by Bosnian Serb forces during the siege of the capital that had lasted during the entire conflict.