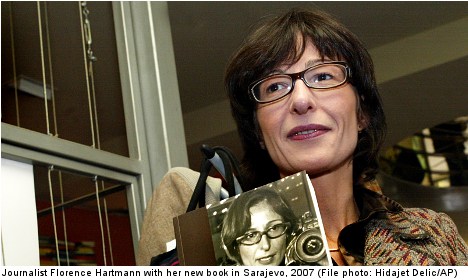 Bildt advised journalist Florence Hartmann to read his books after she slammed him on Friday for failing to condemn late Yugoslav president Slobodan Milosevic and for attending 20th anniversary events marking the start of the siege of the Bosnian city.

“I’m just asking, why did he come, why is he coming today… He should have come when he could have done something” to avoid the war, said Hartmann.

“When he could do something, he was saying that Milosevic was a nice guy… he does not deserve to be here today,” she said.

But Bildt rejected her criticism, accusing her of inaccuracies.

“She should read my books instead of telling lies,” the minister wrote on his blog, adding that the French journalist had exhibited a “customary carelessness with the facts”.

He noted that she was “in conflict to such an extent” with the International Criminal Tribunal for the former Yugoslavia (ICTY) that a warrant for her arrest had been issued.

She was found guilty by the court, her former employer, of contempt for disclosing confidential details of Milosevic’s trial, but has refused to pay a €7,000 ($9,000) fine.

She was also sentenced to seven days in prison and an arrest warrant was issued but France has said it will not arrest her.

From 1995 to 1997 he was also the first high representative of the international community after the signing of the Dayton peace accord that ended the conflict.

political and military support of the Bosnian Serbs.