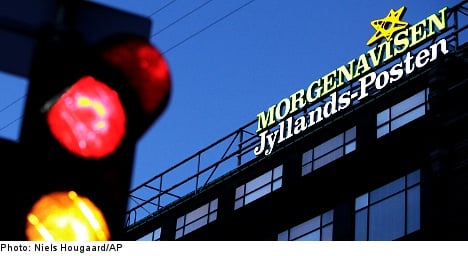 Without informing the suspects in advance, the Danish justice system has classified the names of the judges and courts that gave permission to bug the phones of the three Swedish citizens and a Tunisian charged in the case, reports Jyllands-Posten, the newspaper at the centre of the case.

“I have objections over not being able check these details,” lawyer Kåre Traberg Smidt, who represents one of the Swedes, told news agency TT.

Danish prosecutors charged the four men for “attempted terrorism” over plans to kill the staff of Jyllands-Posten after it carried controversial cartoons of the Muslim prophet Muhammad.

The four men, all residents of Sweden and arrested on December 29th, 2010, had planned to “kill a large number of people” at the offices of the daily, a judicial statement said.

But contrary to standard Danish practice, the court documents made available to the parties in the case include sections where the names of the authorities that gave Danish intelligence the all-clear to bug the suspects have been crossed out.

Danish lawyers criticized the move, since it effectively prevents the suspects from appealing the wire-tapping orders that may be used as key evidence against them.

“There is no law in Denmark that says you can anonymize judges, courts or prosecutors, and now suddenly this happens. We can’t have judges setting the adjudication process or the laws – that’s up to the parliament,” said Traberg Smidt.

By classifying certain information, Traberg Smidt said the justice system was hindering him from doing his job to the best of his ability.

“I don’t even know which court permitted the surveillance,” he said.

After the Easter holiday, Traberg Smidt said he plans to contact the court where the trial is set to be held.

“I have to ask the judge if this is going to be allowed,” he said.

Judge Elisabet Michelsen said the trial would start on April 13th. The accused are a 44-year-old Tunisian, a Swede of Lebanese origin aged 29, a 30-year-old Swede and a Swede of Tunisian origin aged 37.

Jyllands-Posten published a dozen cartoons in 2005 of Muhammad that triggered violent and sometimes deadly protests around the world.

Three of the four men arrived in Copenhagen on December 29th, 2010 in a rented car from Stockholm. They planned to storm the office of the newspaper, located in the heart of the capital, and “kill as many people as possible”.

Danish police who had been collaborating with their Swedish counterparts and had been wire-tapping the men, arrested them just after hearing them say they were “going to” the newspaper office.