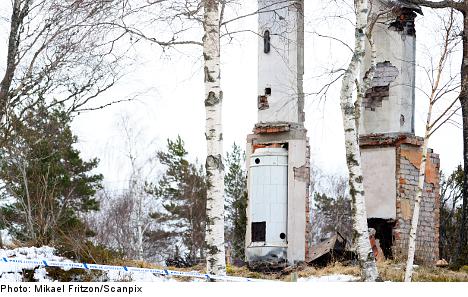 Police said they had identified the victims and alerted their families.

The fire is believed to have started long before neighbours discovered the site of the blaze on Sunday morning at the house located near the village of Härja, some 10 kilometres south of Tidaholm. The bodies were found later in the evening.

By the time emergency services arrived, the chimney stacks were all that remained of the house, radio station P4 Skaraborg reports.

Ingemar Andersson lives 500 metres away and, as their nearest neighbour, knew the family that mainly came to the holiday home for special occasions.

With tears in his eyes, he told a Scanpix photographer at the scene how he came home at around 1am on Sunday and looked out the window without noticing anything unusual. It was only the next morning that the tragedy was discovered.

The family ran over to the holiday home, which they found burned to the ground.

“Everything was gone. It was just smoke and no fire,” he said.

An initial police forensic investigation took some time on Sunday since the site was still very warm from the fire.

The cause of the blaze is not yet known. The house contained no electricity but was equipped with an open fireplace and a wood-burning stove, P4 said.

All six Danish citizens were registered as living in Ängelholm, southern Sweden.