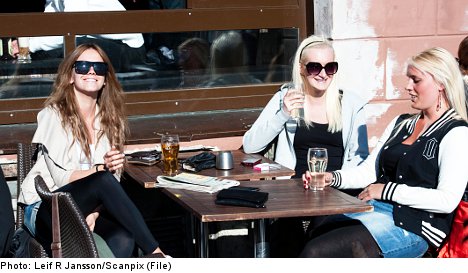 “There will be a return to more normal April temperatures,” said meteorologist Emil Björck.

But the unsteady conditions continued to prevail on Sunday night and Monday morning, with weather service SMHI issuing a snow warning for west coast regions and counties in western Svealand along the border with Norway.

“There aren’t going to be huge quantities; we’ll have four centimetres of snow at most and it’ll disappear quite quickly. These aren’t criteria for a warning really, but the warning has been issued because people maybe aren’t ready for snow,” said Björk.

Rain is forecast on Tuesday for the southern half of the country, while Norrland can expect more snow.

“Then it looks like it’s going to get warmer on Wednesday, with the temperature reaching more than ten degrees in southern Sweden. And after that we’ll get away from the cold nights we’re having now,” said Björck.

Unsettled weather is forecast for the rest of the week, but with temperatures high enough to warrant people dusting off their spring jackets in parts of the country.

“There’s a chance of that, at least from the middle of next week,” said Björck.