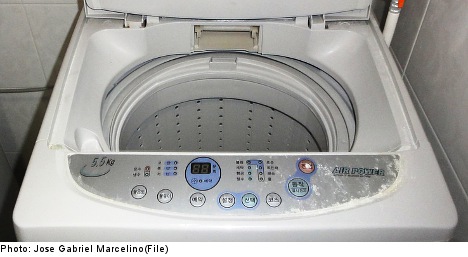 Six rescue workers rushed to the boy’s home at a village in Härjedalen, northern Sweden, after he became trapped halfway inside the perforated basket of the top-loading machine.

Unable to force his hips back out, the boy got stuck in a vice-like grip, newspaper Östersunds-Posten reports.

Having assessed the situation, the rescue team decided they had no option but to dismantle the machine.

“We worked calmly and methodically to avoiding stressing the boy. We pulled the washing machine apart bit by bit, and in the end we had to cut up the actual drum,” rescue leader Sven-Erik Svensson told the newspaper.

“It took almost two hours before we were done,” he added.

Considering his near brush with a spin cycle, the boy coped well with the strain.

“Of course he was upset when he was stuck, but he was consoled and encouraged by one of his parents,” Svensson said.

The rescue worker added that the team had been concerned the boy might sustain injuries from being jammed in the machine for so long, but within minutes he was up and walking about again.