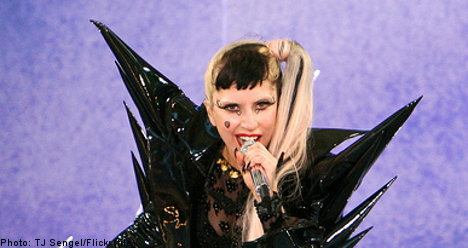 Pop-princess Gaga announced on her official website that her “Born This Way” tour would be hitting Sweden, with one date revealed for the Stockholm’s Ericsson Globe on August 30.

“Attention European little monsters” she wrote on her hugely popular Twitter account on Tuesday morning, and then provided a link to the European tour dates, which begin in Bulgaria on August 14th and continue until Barcelona on October 6th.

This will not be the first time Lady Gaga has been on Swedish shores, having already played two shows in Stockholm, most recently in May, 2010.

But what really captured Swedish fans’ attention was her murder-plot inspired short-film of a music video for the song “Paparazzi”. Not only did it feature Swedish heartthrob Alexander Skarsgård as the romantic lead, but it also had a lengthy introduction with Gaga herself speaking Swedish with her co-star.

While it was only a handful of short sentences, it’s clear that the singer goes gaga over the Swedish language just as much as the Swedish men.

The video, which was directed by another Swede, Jonas Åkerlund, has been watched on YouTube over 81 million times (and is linked below).

Tickets to Gaga’s concert will be released on April 20th at 9am. Both her previous shows in Sweden sold out.