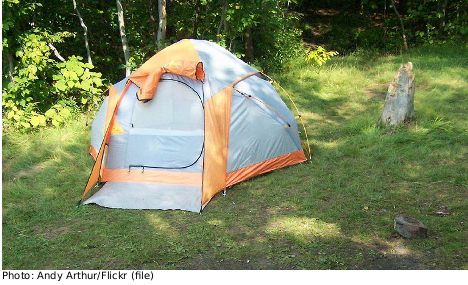 The tent in the picture is not the tent mentioned in the article.

The man, who is originally from the Stockholm suburb of Sollentuna, did not think that the various accommodation solutions offered to him in the past were acceptable.

He objected to the standard of the housing and felt that they would not further his ability to return to an independent life, according to the magazine Hem & Hyra.

Instead, the man said he would prefer to live in a tent, which he could pitch anywhere on common land around the city. He also said he had a lot of problems with the storage of his belongings.

According to the man, he is likely to accept a permanent housing solution if it was offered to him.

However, while waiting for that to come through, the man wanted a grant of 10,200 kronor ($1,497) to finance his purchase of a tent, camping mat, a sleeping bag and a backpack.

Although his request was initially rejected by the social welfare board (Socialnämnden), the administrative court (Förvaltningsrätten) ruled against the previous decision and granted the man his request.

The reason for their decision is that it isn’t detrimental to the man’s health, or inappropriate in any other way, reported the paper.

It also works out at the same price as some of the other accommodation solutions that the municipality had come up with previously.