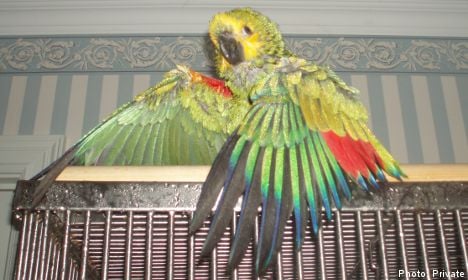 When Blue, an Amazon parrot, escaped from his home in Forsbacka, eastern Sweden, he left behind him a distraught family.

“We were crying. All of us. My two kids couldn’t sleep. Blue has been such a big part of our family,” owner Karin Grönvik Svärd told The Local.

Taking advantage of a temporarily opened door, the parrot made a quick getaway and flew out into the freezing night sky in mid-March.

The family, who witnessed the escape, followed on foot in hot pursuit, calling, whistling, and motioning for the parrot to come back down.

However, after a few circles above the house, Blue the green parrot disappeared into the woods nearby, for what the family believed may be for good.

“All of us started looking for him, my husband was in the car, and me and the children were walking through the forest, whistling. But it was no use, he was gone,” Grönvik Svärd said.

“We eventually figured he must have left to find happiness, and had made an escape for a new life in the wild”.

However, after Blue had spent 24 hours in the wilderness, Karin took to the streets one last time in a last ditch effort to bring him home, whistling and calling his name.

“Suddenly, I saw a green parrot fly out of nowhere, calling out ‘paaaapa, paaapaaaa’ and I knew it was him – even from that distance. ‘Papa’ is a word he always says; it’s his word. He was so happy to see me again. Of course, I was happy to see him too,” Grönvik Svärd told The Local.

The youngest son in the family held out a stick as a landing perch, and Blue came down to the loving arms of the Grönvik Svärd family following his whirlwind adventure in the wild.

The family was overjoyed at the reunion, and happy that their worst fears that Blue had perished in sub-zero temperatures proved fruitless.

As for now, the Grönvik Svärd family is being careful not to let their “crazy parrot” too far out of their sight.

“No one opens the door now, unless we know he’s in his cage,” she told The Local.