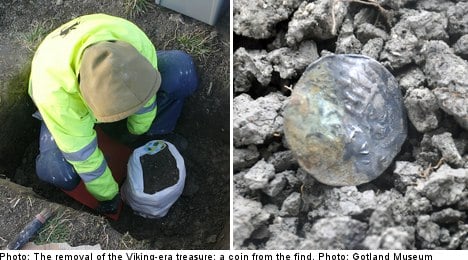 The silver treasure was found last Thursday during an archaeological examination of a field in Rone, on southern Gotland.

“We had an expert out there with a metal detector who got a signal that he’s found something pretty big,” Per Widerström, an archaeologist with the Gotland Museum, told The Local.

The same field has yielded previous treasure finds, including a well-known discovery from the 1880s, when a collection of nearly 6,000 coins dating from the 11th century were uncovered.

The field’s reputation made it a target for amateur treasure hunters and plunderers, prompting the Gotland county administrative board to commission a survey of the area as a preventative measure against any further plundering of valuable archaeological finds.

After being alerted to the new find, Widerström and colleague Majvor Östergren went back out to the field to figure out exactly what lay beneath the surface.

“What we found was a bronze, Viking-era bucket filled with silver coins,” he said.

A preliminary analysis of one of the coins revealed that it was likely minted in Germany some time between 1000 and 1040.

X-rays also indicate that the bucket, which measures 23 centimetres in diameter and has a depth of about 17 centimetres, likely contains “thousands” of coins.

“We can’t say for sure because the x-rays couldn’t penetrate all the silver. There might be other silver artefacts in there, but as it looks now, the bucket appears filled to the brim with coins,” said Widerström.

He explained that the find is unusual in that it was a complete treasure was found intact, something which is likely due to the fact that it was nestled just over 30 centimetres deep in the earth.

“Ploughs only go down about 29 centimetres, which means this treasure has managed to escape damage from all agricultural activity over the centuries,” Widerström explained.

He compared the bronze bucket to a Viking-era “piggy bank” or “cash box”, adding that the size of the find may be one of the first indications of a consolidation in the market of Viking merchants.

“Treasures found before this time are usually much smaller, while those found after, while fewer in number, tended to be much larger,” Widerström said.

“We hope to be able to determine if the bucket was filled all at once, or one several occasions over time.”

He refused to place a monetary value on the find, although museum head Sjövärd explained that even one of the silver coins could be worth “thousands” of Swedish kronor.

Widerström hopes to commence with more detailed examination of the treasure next week assuming additional resources are made available from the Swedish National Heritage Board (Riksantikvarieämbetet).

He added that the field where the coins were found has likely yielded its last Viking-era treasure.

“We’re certain there isn’t anything left there,” Widerström told The Local.