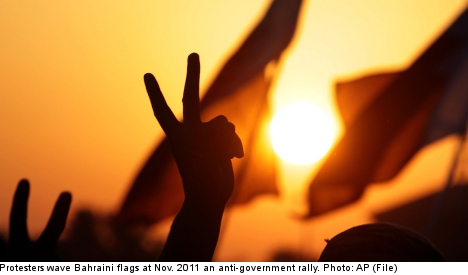 Since the fall of Ben Ali’s dictatorship in Tunisia in Januari 2011, Western governments have been talking about their support for democracy in the Arab world.

The Swedish government is no exception. It has emphasized the role of democracy aid and Swedish communications technology, and invited young activists to conferences and seminars discussing the role of social media in the Arab spring.

However, actions are more important than words, and for many of those hoping for democratic change in the Arab world the real actions of the Swedish government amounts to a betrayal.

We were sad to learn that Sweden’s arms export has more than quadrupled in recent years, with a growing share of it going to authoritarian regimes.

We were even more disappointed when the Swedish arms exports to Arab dictatorships continued to increase in 2011, a year when ordinary citizens from Morocco to Syria and Bahrain raised their voices and risked their lives to call for democracy and justice.

But we were truly appalled by the news that Sweden is not only arming dictatorships, but actively helping the regime in Saudi Arabia to enhance its military capabilities by assisting in the construction of an advanced arms factory.

For many of us Saudi Arabia represents the symbolic heart of the Arab counter-revolution. One year ago troops from Saudi Arabia where even sent to Bahrain to help crush the popular uprising there.

As an absolute kingdom, where women are suppressed and basic human rights denied the citizens, it has no interest to allow any democratic change domestically or in the region.

It is naive to think that this kind of cooperation will not benefit and strengthen the regime in its struggle to contain the Arab spring and silence any opposition to its rule.

The same applies to military cooperation with other authoritarian states; when people have taken to the streets, calling for democracy, in countries like Egypt, Yemen and Syria, in the end they have always been confronted by the armed wing of their regimes, as the final line of the defense for the ruling elites.

We are confident that this policy does not reflect the real wishes of the Swedish people. We sincerely believe that they would not allow their country to arm and support authoritarian regimes if they had been fully informed about the actions of its government.

Reversing this policy would not only be an important act of solidarity with democratic forces in the Arab world, but also a small but symbolic step towards another world order, where democracy, solidarity and human dignity and means more than economic and geopolitical interests.