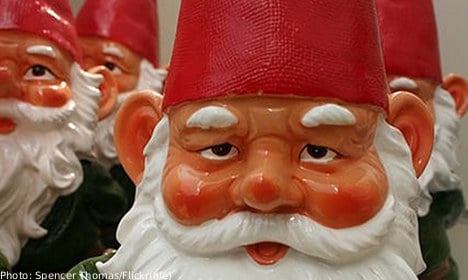 The man was apprehended by police on the outskirts of Eskilstuna when he was transporting the drugged-up gnomes to various suppliers, reported the local Eskilstuna-Kuriren newspaper.

According to the paper, police believe the man has connections to the local branch of infamous Hells Angels, one of Sweden’s most feared motorcycle gangs.

The drugs, allegedly the synthetic substances MDPV (Methylenedioxypyrovalerone) and Methylone, amphetamine-like and psychoactive stimulants, were imported from China.

The drugs were later smuggled into Sweden where they were hidden inside the innocent-looking garden ornaments.

The prosecutor could show evidence that the man had purchased around two kilogrammes of the narcotics from foreign suppliers on at least two occasions.

The police were able to track the orders to the man, as they were allegedly placed from his mother-in-law’s iPad.

After the drugs had been transported into Sweden, they were concealed inside garden gnomes and distributed to the buyers, according to the paper.

The man was found guilty of the offence and on Wednesday was sentenced to four years in prison for aggravated narcotics crimes.