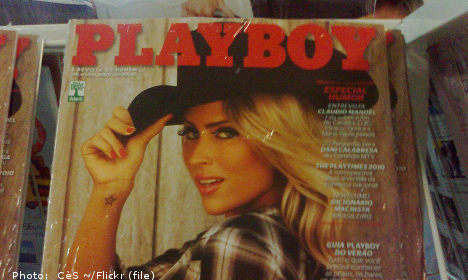 A 21-year-old woman from Ulricehamn, northern Sweden, has been charged for sexual harassment after ordering a subscription to Playboy magazine to a man under his own name, reported the Borås Tidning newspaper.

The woman was initially fined 1,500 kronor ($222) for signing the man up for the unwanted material, but she never paid the fine, forcing the charge to be upgraded into sexual harassment.

It appears things went tits-up for the 21-year-old when the man reported her to police for her prank.

The Local is keeping abreast of further developments.

Police get our ‘seal’ of approval

Passersby in Luleå, northern Sweden, got a surprise when they found a seal flubbering around the city streets, wrote the Norrländska Socialdemokraten newspaper.

Early attempts to coax the animal back toward water led the seal to react violently and bite people.

A police patrol was called in when the Luleå residents were unable to seal the deal, and the officers managed to seal the seal in a dog cage, releasing it into the open water.

A truck somehow managed to spill its load of almost a tonne of liquid wood-glue over a busy road in Linköping, central Sweden.

The glue spill stretched for several hundred metres, according to Corren newspaper.

Environmental experts, who were contacted from the scene, confirmed that the glue was water-based, and could therefore be washed away to the side of the road without damaging the environment.

It is unclear how long Linköping residents were stuck in traffic while the mess was being cleaned up.

Eyebrows were raised around Sweden this morning when free daily newspaper Metro devoted its pages to sex.

The paper held, among many other things, interviews with experts, graphic cartoons, suggested new techniques, the “best” celebrity sex-tapes and perhaps most shockingly, the ideal places for public sex in Stockholm.

“Public sex is legal in Sweden,” the paper wrote, quoting Claes Hedbom of the Normalm Police.

“As long as it doesn’t bother anyone and it’s not offensive behavior.”

You’d think the streets of Stockholm were dirty enough already…