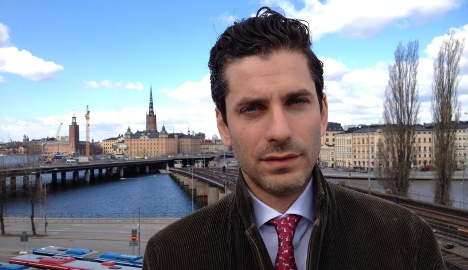 Jens Lapidus sits down for lunch after having spent the morning in a Stockholm court helping a client beat charges of trading in stolen goods.

In the afternoon, he’s scheduled to visit another client locked up at Österåker prison, a medium-security facility about 30 kilometres north of Stockholm.

“This is what I do,” he tells The Local.

“Part of this job is a duty. You do it because you took it upon yourself to do it. It becomes your duty to defend.”

While passionate about his work as one of Sweden’s most prominent criminal defence attorneys, Lapidus finds his time increasingly occupied by duties of a different kind: those that come with being a best-selling author who is helping to redefine Scandinavian crime fiction.

However, as Lapidus tells it, the dual role of lawyer and author go hand in hand.

“The inspiration for all my books comes from the world that I see in my job as a lawyer,” he explains.

The intertwining of Lapidus’s literary and lawyerly duties is exemplified by the fact that his afternoon date with an inmate is set to take place at Österåker, the same prison fled by one of the main characters in “Snabba Cash”, the 2006 debut novel which unexpectedly turned the then-aspiring lawyer into the freshest (and in the eyes of many, the best looking) face in contemporary Swedish literature.

The book, which was published in English in the UK last month as “Easy Money” and came out in the US last week, ended up being the first in a trilogy that has been labelled “Stockholm noir”.

With his gritty, fast-paced tale about the Stockholm underworld told from the perspective of the gangsters and drug lords, Lapidus, 37, helped redefine a genre made popular in Sweden and internationally by the likes of Henning Mankell and Stieg Larsson.

“I don’t have an investigator. I write about criminals… I want to do everything the other way around.”

Indeed, the original inspiration that prompted Lapidus to write what evolved into “Snabba Cash” came from the drama he observed in an actual Stockholm courtroom early in his career.

“There were three young men charged with assault and robbery,” he recalls.

At the conclusion of the trial, the presiding judge asked the young men where they saw themselves in five years, in an effort to determine how willing they might be to change their ways:

At home later that night, Lapidus turned on his computer and started to write.

“I figured that if, in our country, in Sweden, in Stockholm, there are people for whom it’s ‘normal’ to commit crimes, then it also must be fascinating and interesting to go into the heads of these people and try to describe crime from their perspective, crime as something normal,” he explains.

While the story didn’t end up making it into “Snabba Cash”, it became the first in a series of what Lapidus refers to as “therapeutic” writings inspired by his work as a criminal lawyer which formed the basis for his first book.

“I didn’t have any plans to write a novel. I was never this person that always had a dream about writing a book,” he explains.

“It came to me more like a need than something I was planning to do.”

After prompting from his wife, Lapidus sent a rough manuscript to some publishers and before long found himself the author of a genre-defining novel detailing the struggles of the young Swede JW, the escaped convict Jorge, and the Yugoslav mobster Mrado as they navigate a violent mix of drugs, blackmail, and deceit in their quest for “easy money”.

“It’s an ironic title, really. They all want to belong, to climb somewhere and they think the key to the good life is ‘snabba cash‘. But maybe the good life is something completely different,” he says.

While Lapidus believes there is something universal in the journeys made by the characters in “Snabba Cash”, he adds that there is another “very Swedish” layer that he’s uncertain that readers in the United States will appreciate when it comes to JW’s efforts to improve his lot in life.

“Now, when we talk to the Americans about the remake they say ‘what’s so special about that? That’s the American Dream, it’s normal.’ But in Sweden there is something fishy about someone who wants to change class, to move into the upper class.”

Lapidus is blunt in labelling Sweden a “class-based society” and Stockholm as a “segregated city”, something he says Swedes are hesitant to accept.

“It’s a sensitive issue in Sweden… trying to belong where you don’t really belong,” he explains.

“We may not want to admit it, but this is a class-based society.”

While Gamla Stan and the central parts of Stockholm are “very white”, travelling a few stations south on the metro to a suburb like Skärholmen yields a picture of the city that is “totally different”.

“We’ve created a false image of ourselves,” he said.

Many of the criminals in Lapidus’s novels also have immigrant backgrounds, something he argues ensures the books “feel real”.

“If you look at prison gangs or organized criminal gangs in Sweden, they are constituted a lot by immigrants,” he says.

And rather than being criticized for his portrayal of immigrants, Lapidus says the reaction has been quite the opposite among residents of immigrant-dominated Stockholm suburbs.

“If you go to Tensta or Rinkeby, and you ask the young guys out there in their 20s if they’ve ever read a book, they will say, ‘Yeah, two books. One is a book by Jens Lapidus and the other is Zlatan.’,” he explains, referencing the autobiography of Swedish football star Zlatan Ibrahimovic.

“Those are the books these guys read and they love them; it’s their story.”

While class divisions and underworld violence may seem at odds with many people’s view of Sweden as a harmonious, safe country bound by social democratic ideals, Lapidus believes that picture of Sweden is outdated.

“That image was set in the 60s and early 70s… everyone was a part of this grand welfare family,” he explains.

As Lapidus sees it, crime in Sweden has become worse in the last two decades as organized criminal “syndicates” have made crime more “systematic”.

“That being said, however, Sweden is still a comparatively safe place to live,” he says, but adds that elements of the criminal underworld touch people’s lives more than they might think.

“If you go to any pub in Stockholm with a wardrobe or a coat check, you will be involved,” he says.

“But it’s sort of a blessing and curse. Of course, I’m now riding this wave of interest in Scandinavian crime literature,” he says.

“But on the other hand I’m very different from Stieg Larsson.”

Looking ahead, Lapidus hopes he can continue to strike a balance between being a defence attorney and a fiction writer – not to mention a husband and father.

“Financially, I’d be much better off if I quit my job as a lawyer because then I could maybe write a book a year,” he says.

“But I’m not going to change my life just because my books are selling really well. I like my job…I also would go crazy if I would sit and write all day. I like to have structure and I get a lot of inspiration from working as a lawyer.”

Other projects he’s considering include writing a Swedish courtroom drama for television along the lines of “Law & Order”.

“I’ve been seriously contemplating writing something along the lines of a John Grisham novel or something for TV,” he says.

“But I haven’t yet because all of my colleagues would think I’m writing about them.”

So far, Lapidus remains modest in the wake of his success.

“I’m a pretty boring guy,” he says sheepishly, adding however, that he wouldn’t rule out living in the United States for a time if he books achieve success there on par with how they did in Sweden.

But at the end of the day, his home – and his heart—are firmly rooted in Stockholm, the city which, is in many ways, is as important as any character in the books that helped redefine perceptions of his hometown and what it means to be a Swedish crime writer.