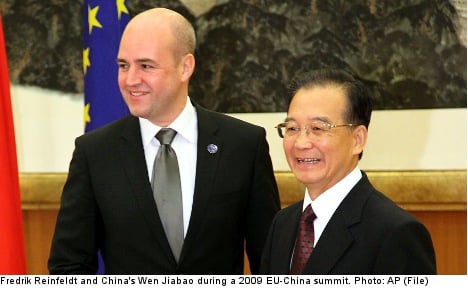 Wen will visit the two nations during a four-country visit to Europe from April 20-27 that will also take the premier to Germany and Poland, Vice Foreign Minister Song Tao told journalists.

“We hope to work together with relevant countries, including Iceland and Sweden, to contribute to peace, stability and sustainable development in the Arctic,” Song said.

China already has the backing of Sweden to join the Arctic Council as an observer nation, he said.

While in Iceland, Wen will explore ways to expand bilateral ties, including cooperation on geo-thermal energy and research into the northern lights, Song said.

During his visit to Sweden, Wen is also expected to oversee the signing of an agreement to establish a Swedish industrial park on sustainable development, he said.

The Arctic Council is an intergovernmental forum promoting cooperation among eight Arctic States, particularly on sustainable development and environmental protection.

China is reportedly eager to expand its role in the arctic as the ice sheet melts there due to global warming, making it increasingly possible for ocean-going ships to navigate the resource rich region.