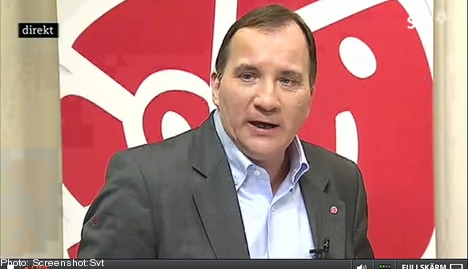 In an opinion article co-written with the party’s new economic policy spokesperson Magdalena Andersson and published Tuesday in the Dagens Nyheter (DN) newspaper, Löfven was frank about the importance of individual responsibility when it comes to finding a job.

“Society can create the conditions and opportunities, but for it to work, the individual needs to take responsibility. Everyone should be able to demand their rights, but also do their duty,” they wrote.

According to Löfven and Andersson, the number of people who have been out of work for more than two years has risen by 175 percent since the current centre-right Alliance government first came to power in 2006.

And despite Sweden’s high unemployment, the government doesn’t have any new proposals in the spring budget it released on Monday, the Social Democrat leaders contend.

“It’s become increasingly apparent that the government has already played all its cards, is out of ideas and that their policies have no effect on unemployment,” Löfven and Andersson write.

The Social Democrats shadow budget will boost internships, traineeships, and job opportunities for young people, while at the same time increasing demands on those seeking benefits.

The party will also clarify what it plans to do to strengthen Swedish businesses’ competitiveness and how to improve the process for putting good ideas into action, something which they argue can be stifled by a lack of access to venture capital during the early phases of a business’s growth.

“We need to improve constantly, boost our knowledge, and be first when it comes to the development of new business ideas, products, and services.”