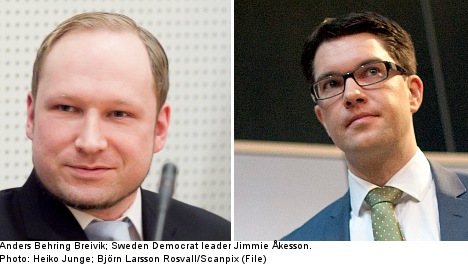 Right-wing extremist Anders Behring Breivik’s deadly attacks in Norway sent shockwaves through the serene Nordic lands, rocking their populist parties and prompting at least one to clean up its act.

In the nearly nine months since Breivik massacred 77 people on July 22nd, such parties have experienced several setbacks amid accusations their criticism of immigration and Islam helped pave the way for the tragedy.

“There has been a very infected debate. It is a very uncomfortable feeling to be accused of such a thing,” Mattias Karlsson, party secretary for the Sweden Democrats, told AFP.

In the 1,500-page manifesto he published online shortly before the attacks, Breivik claimed to be on a crusade against multi-culturalism and the “Muslim invasion” of Europe.

He hailed the sentiments expressed by Norway’s Progress Party, the Sweden Democrats, the Danish People’s Party (DPP) and members of the Finns Party.

Horrified to find themselves mentioned in the document and to find the confessed killer voicing support for some of their cherished ideas, the parties immediately distanced themselves from Breivik.

“I resent everything that he stands for. I resent his actions and will not be associated with this guy. Really, I will not,” Progress Party chief Siv Jensen told AFP shortly after the attacks.

Jensen and her Nordic peers were however quick to insist the attacks would not change their criticism of high immigration numbers and Islamic extremism.

“Under no circumstances do I intend as a politician to be afraid of what I say,” DPP chief Pia Kjaersgaard told the Politiken daily last August.

Experts note that surprisingly little has changed within the parties.

“The parties have of course had to distance themselves from what Breivik did but they haven’t changed their opinions,” said Ann-Cathrine Jungar of the School of Social Sciences at Sweden’s Södertörn University.

“A lot could have happened, but it hasn’t,” he told AFP, pointing out:

“There could have been a very big discussion after the attacks about what kind of debate is legitimate: is it legitimate to paint Islam as a threat?”

Sweden Democrat Karlsson meanwhile stressed that “we haven’t seen any reason to go through political analysis or introspection on the basis of what this crazy man did.”

There is one exception: the Progress Party has undergone a process of soul-searching.

This, experts say, is in part because the party once counted Breivik as a member but especially because the attacks were such a Norwegian tragedy.

Progress Party foreign policy spokesman Morten Høglund acknowledged the attacks had led the party to discuss its rhetoric, pointing to the term “sneak Islamisation” as an example of a phrase now scratched from its vocabulary.

“We meant to address the problem of radical Islam, but the term could be interpreted as an attack on Islam as such… It was not a good term,” he told AFP.

But although the party’s rhetoric might shift, Høglund insisted “the issues related to immigration and integration and so on did not disappear and we continue to debate them.”

Elisabeth Ivarsfaten, an associate European politics professor at Bergen University, however said the party had basically stopped pushing immigration issues since the attacks, even as its support plunged following the tragedy and it was clobbered in September local elections.

“The Progress Party has tended to pull out the immigration card every time they do badly, but this time they haven’t,” she said.

The other populist parties in the region have also seen their support suffer since the attacks.

The DPP, which had dominated Danish politics for a decade as a key government ally, lost that position and saw its backing slip in September general elections, while the Finns Party, which soared in parliamentary elections in April 2011, suffered a deep loss in presidential polls earlier this year.

The Sweden Democrats have meanwhile seen a stagnation of the surging support they had experienced since winning their first parliamentary seats in 2010.

While fear of being associated with Breivik is so strong that both the Finns Party and the DPP flatly refused to be interviewed, experts agree their setbacks are only tenuously linked to July 22nd.

“The populist parties outside of Norway have not been that affected and I think if their popularity has gone up or down it is because of other things,” Ivarsflaten said.