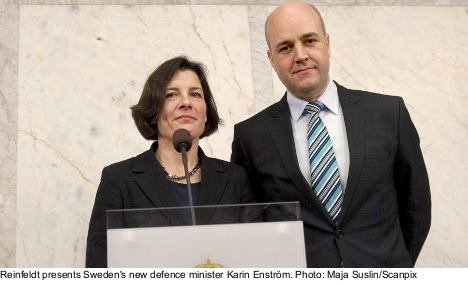 “I am very happy and honoured,” said Enström at a government press conference on Wednesday.

Enström was born in 1966 and has been an MP for Stockholm county since 1998. She is the chairperson of the Riksdag’s committee on foreign policy and a captain in the Swedish Amphibious Group.

“Karin Enström is a very experienced politician. I am very pleased that she has agreed,” said Reinfeldt, especially stressing the new minister’s background as an officer in the Swedish armed forces.

One of the more fundamental tasks the new defence minister will face is to keep the armed forces’ finances in order, said Reinfeldt.

The former defence minister Sten Tolgfors resigned last month in the wake of a scandal involving Swedish plans to aid the building of an arms factory in Saudi Arabia.

Sveriges Radio (SR) revealed earlier in March that Sweden has entered into a deal with Saudi Arabia in 2005, which included the development of a Saudi armaments factory.

After weeks of intensive media coverage of the arms deal, Tolgfors chose to leave the government at his own request. He said at the time that he had been planning to leave later this spring anyway, but that the pressure from the media made him decide to leave sooner.

Despite this, prime minister Reinfeldt didn’t have a substitute waiting in the wings, but appointed minister for infrastructure Catharina Elmsäter-Svärd as acting defence minister.

Tolgfors was adamant that there had been no political pressure behind his resignation.

At the same time, the defence ministry’s involvement in the Saudi arms deal became more and more apparent despite the minister’s attempts to shift the blame onto Sweden’s Defence Research Agency (Totalförsvarets forskningsinstitut, FOI).

Tolgfors has been reported to the Committee on the Constitution (Konstitutionsutskottet, KU) and the preliminary investigation will commence in the autumn. The investigation into the FOI has already begun.