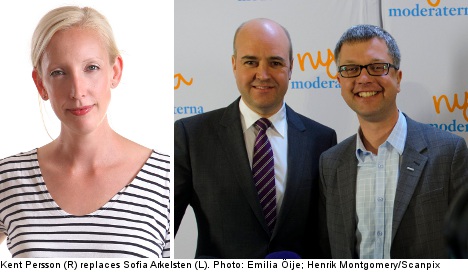 Prime minister Fredrik Reinfeldt announced at a Friday morning press conference that Kent Persson, who previously served on the local council in Örebro, would replace Arkelsten as the Moderates’ party secretary.

“I’m happy and honoured by this assignment,” Persson said.

“We’re going to start our election campaign straight away.”

According to Reinfeldt, Persson will be tasked with increasing the pace of the party’s work in a new political atmosphere created in part by the new leadership of the Social Democrats, the Moderate Party’s primary opponent.

“It’s about working faster and smarter,” the prime minister said.

Reinfeldt believes the Social Democrats have begun using the Moderates’ rhetoric to describe what Sweden needs.

“That has also resulted in them achieving short-term gains in voter support. That’s something I take seriously,” he said.

Persson added that the Moderates need to be in a constant state of renewal in order to hold remain attractive to voters.

“It’s basically about recognizing society’s problems and dealing with them. That’s something we do in spades by going out and listening to people,” Persson told reporters.

“The most important question ahead of the 2014 election is jobs. The Moderates and the Alliance have won two election on the issue of jobs.”

According to Reinfeldt, Arkelsten wanted “another direction” in her life, saying “we’ll get back to that” when asked about what her new role in the party might be.

While Reinfeldt refused to speculate on a future role for Arkelsten, who wasn’t present at the press conference, political analysts are bubbling with theories as to what may have brought about her hasty and unexpected departure.

“[She] hasn’t been deemed to have the capacity to charge up the Moderates to win an election.”

Not soon after taking over as party secretary from political wunderkind Per Schlingmann following the Moderates’ 2010 electoral success, Arkelsten, had to fend off allegations of corruption for accepting an all-expenses paid trip to the south of France from Dutch oil company Shell.

She has also been criticized for her misrepresenting the Moderates’ role implementing the right to vote in Sweden.

In a message sent to friends and associates, Arkelsten said she was leaving her post because it was “time for change and renewal” in her life.

“It’s been a really fun job; I’m proud of what we’ve done so far in terms or renewal and political development,” she said.

“But I have my reasons and I’ll get back to you later about the political stuff.”

Persson, 41, is married and has two children and serves on the local council in Örebro municipality as well as on the Örebro County Council.

He has previously championed cooperation between the centre-right governing Alliance and the Green Party, something which he claims has worked well on a local level in Örebro, where the Moderates and Greens are both in opposition.