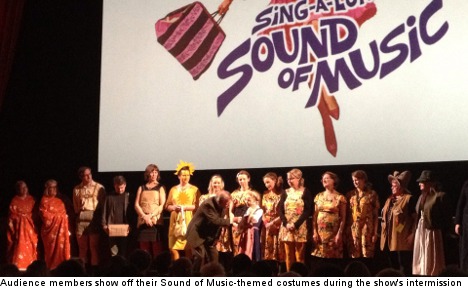 Passive entertainment is, we are told, passé.

In the age of “Idol” and “Let’s Dance”, we no longer simply sit spellbound by the romantic stars of stage and screen.

Rather, we in the audience now control the outcome of TV shows with televotes, choose alternative film endings, or bare our insecurities (and much else besides) for a prime time audience in any of a plethora of reality television shows — many of which leave something to be desired.

But for those of us who can resist the call of exhibitionist television, there’s still a nagging desire to be part of the action.

This might perhaps be the reason for the phenomenal success of the Singalong Sound of Music, which has been playing around the world since 1999 and has been playing in cinemas around Sweden for exactly ten years this year.

The Singalong is, in essence, what it sounds like – an audience sitting in front of a cinema screen, singing along to Rodgers and Hammerstein’s classic 1965 film starring Julie Andrews and Christopher Plummer.

But this really doesn’t cover the half of it.

The British have a word for this: camp. Musicals – particularly those involving nuns, cuckoo clocks, clothes made out of curtains, naughty Nazi messenger boys and lederhosen – are camp by definition. Somehow, though, this format manages to make it camper.

The campness is exacerbated by the fact that the evening is very ritualized.

You sit down, stand up, sing, recite lines at appointed junctures. In its way it’s like a slightly-more-than-usually kitsch and remarkably boisterous Catholic mass – with a full complement of nuns, of course.

It’s probably fair to say that most members of the congregation are far from recent converts, but there is help on hand for the newly evangelized.

The high priest of the evening is an Englishman – dressed for the occasion as an Austrian – David Lones. His opening gambit it to tell you to forget everything you have ever been taught about how to behave when watching a film.

But by this point such instructions are almost superfluous. The stream of male nuns and students dressed in floral curtains should have already disabused anyone who thought they were turning up for a night of charming vintage cinema.

For all the silliness, it’s actually vaguely complicated. There are detailed instructions about what to shout at the screen when various characters enter.

The chaste but feisty Maria gets a ‘hurrah’, the catty baronness gets a ‘meow’. You even get a little goody bag full of props, to be used at various high points of the evening.

Perhaps it’s the instructions, with their Ikea-like level of complexity, that make the Swedes love the Singalong Sound of Music so much (it has been more successful here than nearly anywhere else).

Maybe it’s just the fact that this is a country that loves communal singing. It’s certainly a chance to enjoy a beautiful classic film in a beautiful old cinema – although in a slightly unconventional format.

But the thing is – they’re onto something. If you want an evening out that leaves you talking spontaneously to the person sitting next to you, that has you screaming with laughter, that leaves your head buzzing with endorphins and your throat hoarse with singing, then there really is nothing like it.

After two raucous performances this spring, producer Lones has promised this season’s third and final Stockholm show on Wednesday, May 30th at Stockholm’s regal Skandia cinema.

So whether you’re a seasoned Singalong veteran, a die hard Sound of Music fan, or simply looking for another reason to dust off that nun costume tucked away in your closet, be sure to catch the show before it once again says “So Long, Farewell” to the Swedish capital.

It will almost soon be something you count among your “favourite things”. 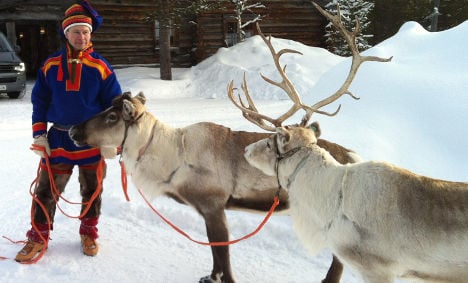