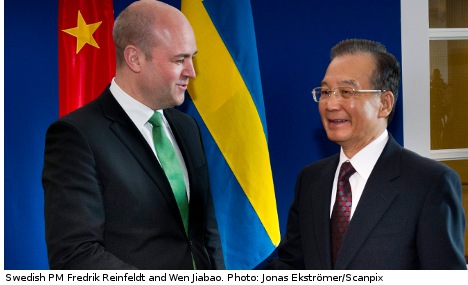 Five bilateral trade deals were signed between the two countries, and six agreements with companies.

Volvo Cars meanwhile announced a memorandum of understanding with the China Development Bank, but did not disclose a sum.

That agreement concerns China Development Bank’s possible financing of Volvo Car research and development programs in the area of efficient energy technology, as well as production facilities in China.

“I am very happy to announce the partnership with China Development Bank Corporation, as it will assist us in realising our ambitious growth plans for the Chinese market and enhance our ability to develop clean, efficient driveline technologies,” Volvo Car chief executive Stefan Jacoby said in a statement.

According to financial daily DI, the agreement will enable the Swedish brand to pursue its ambitious 75-billion-kronor (8.5-billion-euro, $11-billion) investment programme until 2015.

On Tuesday, Wen visited Volvo Cars’ main plant in Gothenburg on Sweden’s west coast, where he toured the factory and watched a crash test performed before travelling to the capital Stockholm later in the day.

Wen was accompanied by 10 ministers during his three-day visit, as well as

Following his bilateral talks with Reinfeldt, Wen also announced Chinese plans to enhance cooperation with the Scandinavian country in the field of sustainable development.

“The Chinese side is prepared to establish a special loan worth one billion euros ($1.3-billion) to support the businesses of the two sides to engage in scientific research and industrial cooperation and to promote the implementation of a number of priority projects,” Wen said.

Wen, as well as the thorny subject of China’s human rights record.

“Even if our cooperation is extensive, there are areas where we disagree. Issues of democracy and respect for human rights are such areas,” he told reporters.

“At our meeting today I expressed concern for the treatment of human rights activists, the difficult situation in Tibet, limitations on freedom of information, not least on the Internet. I also raised the EU’s list of especially important cases,” Reinfeldt said.

Wen responded that “China respects and is committed to protecting human rights and will continue to make unrelenting efforts in this regard, in keeping with the Chinese constitution.”

On Wednesday, Wen was scheduled to meet Sweden’s speaker of parliament and address a Stockholm conference on sustainable development, before departing for Poland, the final leg of a four-nation European tour that has alreadytaken him to Iceland and Germany.