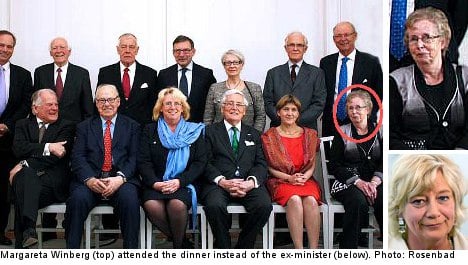 “I received an invitation; it had my name and my address on it. I didn’t really think too much about it,” said Margareta Winberg, 67, from the Stockholm suburb of Sundbyberg to The Local.

The invitation was supposed to have gone to ex-agricultural minister, ex-deputy prime minister and former ambassador to Brazil, Margareta Winberg, 64, who was to attend a dinner at the opening of a major environment conference hosted by current environment minister Lena Ek.

Instead, the official invite went to another Winberg altogether.

Rather than having worked for the Swedish government, the Winberg who received the invite used to work as occupational therapy assistant in the Stockholm district of Solna before she retired.

When she received the invitation, Winberg thought that perhaps it had something to do with her previous employment.

“But I didn’t think too much about it nor did I know much about the dinner. Just that I was invited and that it was ‘about the environment’,” said Winberg.

On the set date, Winberg got herself glammed up and duly presented herself at Sweden’s official government office complex at Rosenbad.

When she turned up at the door, the organizers and minister Ek quickly understood that there had been a mix-up.

Instead of ex-minister Winberg, it was ex-occupational therapy assistant Winberg who stood before them.

However, they soon regained their composure.

“When Lena realized the mistake she did everything she could so that the lady wouldn’t feel uncomfortable,” said Erik Bratthall, press spokesperson for Ek, to daily Aftonbladet.

Despite the discovery of the gaffe, retiree Winberg was escorted to “her” seat and introduced to everyone with an explanation of what had happened.

“I was allowed to take part anyway. The food was nice and there were a lot of people talking and talking,” Winberg said.

Bratthall told Dagens Nyheter (DN) that Ek thought the whole thing was “a great laugh” and that no harm had been done.

Nor were organizers too concerned about the potential security threat that presented by having an unintended guest attend an official government event.

According to DN, the “real” Margareta Winberg has since received an apology from Lena Ek and is taking the whole incident cheerfully.

“I hope my namesake had a lovely dinner. She has never attended a government dinner, and I have,” she told the paper.

The involuntary dinner-crasher Winberg said she really didn’t feel awkward taking part in the meal despite the obvious mix-up.

“I just took it for what it was; a mistake, as did the others. I had a great time and listened carefully to all the speakers,” she said.

The best part of the experience was the speeches, according to Winberg. Her husband had been disappointed he was not invited, but when she retuned home her “head was tired”.

“But it was great altogether,” she told The Local.