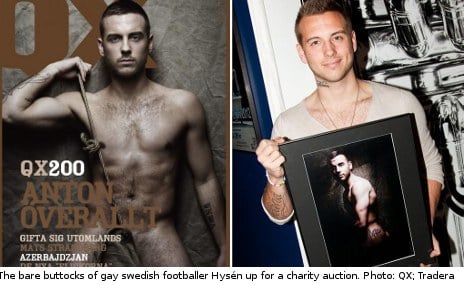 Öhrman’s comments came in conjunction with the publication on Wednesday of QX’s 200th issue, for which Hysén bares all in a provocative cover photo shot by photographer Magnus Ragnvid.

Hysén, the son of former Liverpool and Fiorentina legend Glenn Hysén, made headlines across the globe in March 2011 when he openly declared his homosexuality.

The Swedish footballer, who plays in the Swedish third division for Utsiktens BK, has since been voted Sweden’s “Gay of the Year” (Årets homo) by QX magazine.

More recently, he’s been thrust back into the spotlight as a contestant on the Swedish version of the Let’s Dance reality television show.

“He doesn’t just dance around in tight spandex, but he also does a lot to combat homophobia in the sports world, primarily in England and the United States,” said Öhrman.

In addition to gracing the cover of QX, a picture of Hysén’s naked body is also at the centre of a charity auction organized by the magazine and the Swedish Federation for Lesbian, Gay, Bisexual and Transgender Rights (Riksförbundet för homosexuellas, bisexuellas och transpersoners rättigheter – RFSL).

The signed image, in which Hysén’s bare behind features prominently, has been put up for auction to help raise money for the St. Petersburg-based gay rights group Coming Out and its campaign against recently adopted Russian laws which criminalize homosexuality.

“Because there’s been so much discussion about his arse in “Let’s Dance”, we’ve taken a signed and framed photograph of the arse that we’re putting up for auction,” Öhrman told Expressen.

The auction, which is being run through Swedish auction site Tradera, runs through Sunday, and all the proceeds from the sale will go to Coming Out.