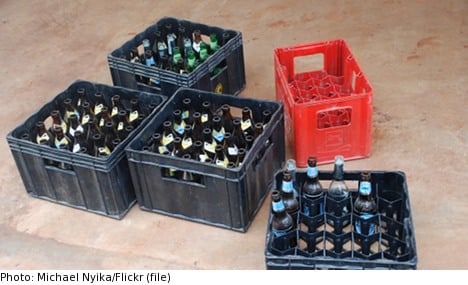 The crates in the picture are not the crates mentioned in the article.

“I have seen a lot in my forty years at Systembolaget. But this was different,” said store manager Thomas Lindholm to local paper BLT Sydöstran at the time.

The incident occurred in September last year, when a brewery truck was parked outside of local alcohol store Systembolaget in Olofström in southeastern Sweden.

The driver had been unloading the last bottles and reloading the truck with empties to take back to the brewery.

A large number of empty bottles had been piled on the back of the truck, waiting to be dealt with.

However, the keys to the truck had been left in the ignition and at an opportune moment, a rather inebriated but determined thief stole into the driver’s seat and hijacked the vehicle, with the real driver stuck on the back of the truck.

Luckily the truck driver managed to jump off and got away unscathed.

The truck, however, careened away up the street, with the loading platform down, leaving cracked bottles, glass and crates in its wake.

“At one point the truck was no more than two centimetres from crashing into a Volvo. It was terribly dramatic,” said Lindholm to the paper.

When police eventually caught up with the man, they found he had a blood alcohol content over 1.24 promille.

The limit for drink driving in Sweden is a blood alcohol content exceeding 0.2 promille alcohol.

Several cars had their tires punctured by the shards of glass that were strewn everywhere in the trucks wake.

The incident caused a major traffic jam in the town centre and volunteers eventually ventured out in the streets trying to sweep up most of the glass before any other accidents were caused by the debris.

The court sees the offences as aggravated as the man has “showed apparent indifference to other persons’ life and property”, according to BLT.

The man has admitted to all charges.