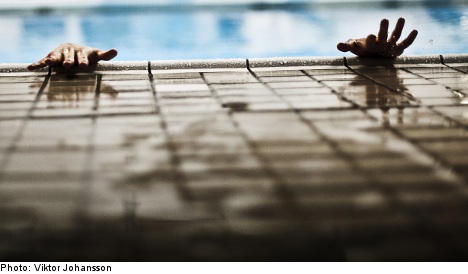 Johansson, 24, entered the competition when he heard about it through his teacher at Biskops-Arnö where he studies photographic journalism in Mälaren, central Sweden.

He said that instead of focusing on the typical aspect of sport photography, where anyone can capture the winning moments, he chose to concentrate on training shots of Christoffer Eskilsson, Sweden’s top 10 metre diver.

Click here to see more of the winning images

“There is a lot behind the scenes that people don’t usually see. Christoffer is so focused, he trains alone, and he has to be strong,” he said.

“Christoffer is the only Swede competing in the 10 metre diving championships. He allowed me access to all this, and I tried to capture that feeling in my pictures,” he told The Local.

The official Google prize website praised the Swede; especially his unique choice on what Johansson himself calls “a different perspective of athleticism”.

“Instead of glamorous action shots of an athlete in competition, he has produced arresting and unexpected photographs that focus on the long, lonely hours of repetitive training and practice that it takes to excel in your field,” wrote Google in a statement.

Johansson will have his prize-winning snaps exhibited in London’s Saatchi Gallery from 25 April to 22 July along with the 10 other finalists’ work.

More of his photos are also currently on display in Stockholm at the Young Arts gallery, an exhibition which ends in one week.

Meanwhile, Johansson is busy working on projects for the summer, as well as handling multiple offers from companies eager to use his art – even though he is still just a student.

“It’s just a great feeling, I’ve found the right path and I’m excited about what might happen next,” he said.

Johansson first prize also includes a trip to a destination of his choice where he will be mentored by a professional photographer, though he is still unsure about where he will choose.

“I haven’t thought about where I might be going, but it will be somewhere with a different culture than Sweden!” Johansson told The Local.