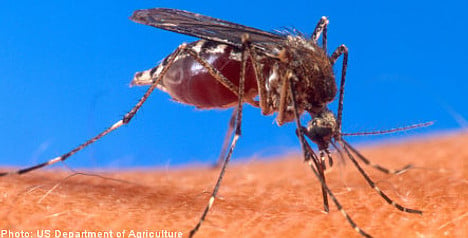 There has been a general angry buzz in the Dalälven area among local residents, who have complained that the summers are intolerable when shared with so many hungry mosquitoes.

The government decided to act on the problem, and announced on Wednesday that they would eradicate the mosqitoes by bombing the whole municipality with pesticide.

“People fare very badly when there are so many mosquitoes,” said the environmental minister Lena Ek to the Aftonbladet newspaper.

Helicopters will be used to deploy pesticide bombs to eradicate the unsuspecting mosquito population.

The target of the 9,000 hectare area will be the insects’ larvae, and the eradication of this is hoped to prevent further itchy situations.

In Sweden, a mosquito population is considered to be dire when over 5,000 are caught in one night trap, as was the case in the Dalälven region.

Meanwhile, there are concerns that the insects may build up a resistance to the pesticides and come back in even stronger numbers.

“But one must be careful and keep checking that we don’t start seeing a resistance to the pesticides. There are governmental decisions in place that we will be testing against this,” Ek told the paper.

Ek was keen to point out that that she didn’t want residents to feel the sting any longer, noting that previous summers were saved by similar procedures.

“It’s clear that the people who live there are worried and we’re trying to do this as well as we possibly can for them,” she told the paper.

The pesticide used will be Vectobac G, which is biodegradable, and will be used in the municipalities of Heby, Tierps, Älvkarleby, Sala, Avesta, Gävle and Sandviken.

The municipalities can choose at their own discretion when to begin the bombing.