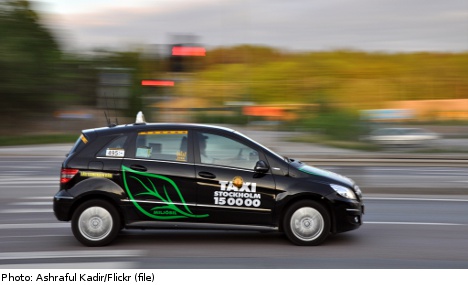 The parliament discussed the issue on Wednesday, in the wake of a slew of recent Swedish media attention in which it was reported how wildly varying a taxi fare can be in the nation’s capital.

The Dagens Nyheter newspaper (DN) claimed that a taxi ride from the Arlanda airport to central Stockholm can cost anywhere from 300 kronor ($45) to over a thousand, depending which taxi is chosen.

The government decided to appoint a commission and to introduce mandatory reporting centres. There will also be a new requirement for the taxi drivers’ local knowledge, which used to be required in Stockholm earlier but was removed on April 1st this year.

The drivers will also be controlled through the Swedish Tax Authority (Skatteverket) and will be required to report their incomes.

While the new laws will not affect the drivers on the black market, the tax agency considers that this increase in reporting earnings will allow access to withheld taxes that are estimated to be worth around one to 1.5 billion kronor per year.

The process of bringing the laws into effect is something that MP Anders Ygeman of the Riksdag’s committee on traffic (Trafikutskottet) believes may take up to a year, but will be worthwhile.

“You can’t get access to all the tax evasion, but by establishing these reporting centres, the tax agency believes it can bring in 400 million kronor through the operation of taxis with clear signs,” he told DN.

However, the introduction of the new laws still leaves the possibility of exorbitant taxi prices aimed at visitors to Sweden.

“We still will have the freedom of set prices, so the drivers are doing nothing illegal, even if it is deeply immoral and aims to trick travellers,” he told the paper.