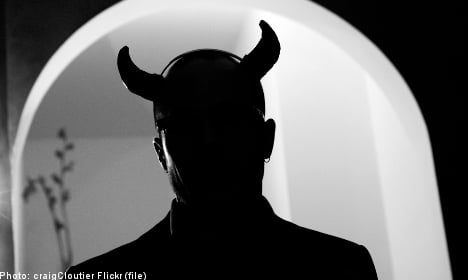 Per-Robin Gustafsson, 25, headed to an after-party in Stockholm on Tuesday after meeting a “gothic” couple at a bar in the city.

“I thought it was going to be a normal party, but suddenly it became clear that the pair were some kind of Satanists,” Gustafsson told The Local.

Despite having only met the man and his girlfriend a few hours earlier, the comedian reported that he was shocked when the man turned violent.

“The man said ‘Do you want to see how we turn people into goths?’ and I said OK,” he said.

The attacker, who Gustafsson described as a “gothic rocker”, then knocked the stand-up down.

“Then, he started chewing on my cheek, like a dog, before beating me.”

The attack left Gustafsson in hospital for 12 hours, suffering a fractured neck and collarbone, as well as an injured thumb. Safely home again, though unable to move, he recounted the finer details of the ordeal.

“I couldn’t believe what was happening. I told him that he had mental problems, and asked if it was some kind of a satanic love ritual. He wanted to kill me and offer me to the gods,” he told The Local.

“He was really calm too, which made the whole thing scarier. It was like a horror film,” he said.

After being knocked unconscious, the comedian woke to hear the man’s girlfriend pleading for an end to the violence. However, the beatings continued, then the man threw the 25-year-old out of the apartment and into the stairwell.

Police and an ambulance arrived shortly after, and the police have begun an investigation into the incident.

Meanwhile, the comedian is considering how the bizarre Satanic rituals may feature in his subsequent stand-up routines.

“I can probably turn this on its head and use it in a show,” he said.

“But I don’t think I’ll be partying with those guys again,” he told The Local.