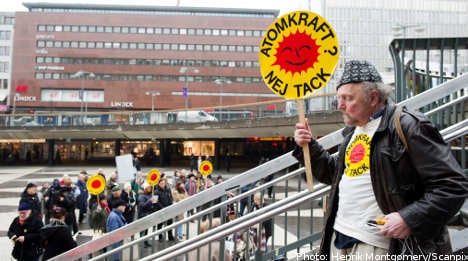 According to the survey, 44 percent of Swedes are in favour of phasing out nuclear power either immediately or after current nuclear power stations have completed their lifespan.

The proportion in favour of expanding nuclear power resources in Sweden or replacing existing ones amounted to 35 percent.

The survey interviewed 1,500 people during the autumn of 2011 with the full results expected in June 2012.

The Swedish public has long been deeply divided regarding the nuclear power issue.

Following the Three Mile Island accident in Harrisburg, Virginia, USA in 1979, all political parties in Sweden’s parliament agreed to the holding of a referendum.

The compromise that followed allowed for three different choices to be put to the public – option 1,2,3.

Option 2 – a sort of compromise promising a long term nuclear phase out and ensuring continued state ownership of power stations – won a narrow plurality of the non-binding referendum.

Following the vote, the parliament agreed to close all of Sweden’s nuclear reactors by 2010. This date has passed without prospect of the decision being put into effect.

In fact parliament voted in June 2010 in favour of building new reactors to replace the existing ageing stations.

Nuclear power accounts for just under 40 percent of the electricity produced in Sweden with ten reactors currently in operation.

The ten reactors are located at three locations – Forsmark, Oskarshamn and Ringhals. Barsebäck in southern Sweden was closed in 2005.