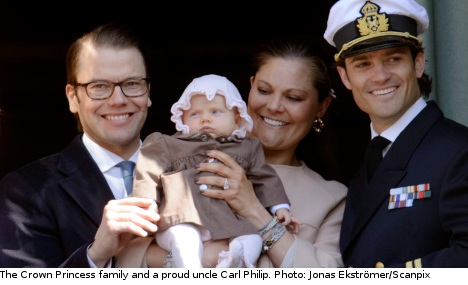 According to news agency TT’s reporter, several hundreds of Stockholmers gathered in the lovely sunny weather.

The Royal Navy’s music corps started off the celebration with a medley of Swedish group The Ark’s songs, as well as a version of super group Abba’s The Winner Takes it All.

The King came out on the balcony to meet the Royal Guards and after that the children who were there to celebrate their king were able to present him with flowers.

Just after midday, the King came out for a second time. He was then joined by Prince Carl Philip.

Crown Princess Victoria and Prince Daniel also made an appearance, which had not been part of the original programme.

With them was the two-months-old baby Estelle, the first grandchild of King Carl XVI Gustaf, making her first ever official appearance. Prince Daniel held her up to the window and they waved to the gathered crowd, which was jubilant with appreciation.