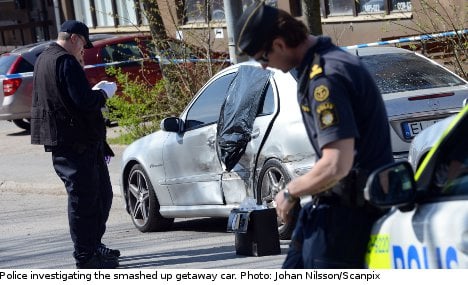 “We still don’t know if they managed to get something from the vehicle or not. No one was hurt,” said Catharina Järping of the Stockholm police to news agency TT.

The robbers attacked the vehicle around 11.20am on Monday, threatening the guard with both an axe and a pistol after he had parked the van near Swedbank.

The robbers then made their getaway in a Volvo. The vehicle was dumped nearby and the robbers changed cars a few streets away, where a third person waiting in a Mercedes picked them up.

Despite the car change, the perpetrators were discovered again by the pursuing police a bit further out of the city centre.

“They spotted the vehicle and bumped into it to try to stop the car,” Järping told TT.

But somehow the robbers still managed to escape the officers and dumped the smashed up car in the Stockholm suburb of Örnsberg, reported daily Aftonbaldet.

From there on, the police have no traces of the gang, despite searching the area by helicopter.

A large scale police search of the area was launched, with some 30 patrol cars involved in the action.

According to police they are grateful for any information that the public might have about the incident, and they are currently talking to witnesses to the event.