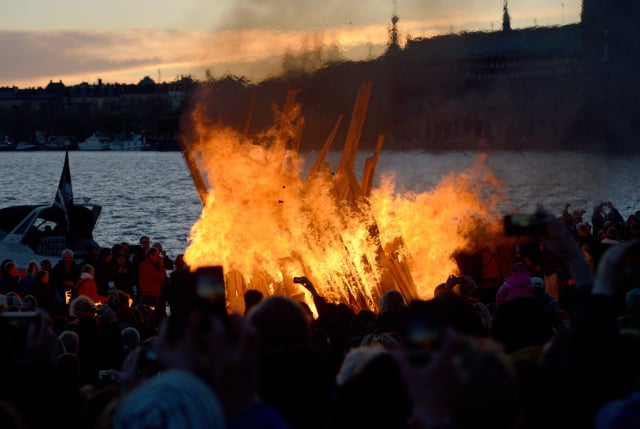 What are people celebrating?

Walpurgis night is when Swedes celebrate the end of the harsh winter and look forward to the summer sunshine. It takes its name from Saint Walpurga ('Valborg' in Swedish), an English missionary who promoted Christianity in other parts of Europe, especially Germany, who was for centuries remembered on April 30th, but the tradition of lighting fires around this time dates back to pre-Christian times in Sweden. These days it has nothing to do with religion and is mainly seen as a way of celebrating the arrival of spring.

It's also the King's birthday, but that's just coincidence. In most towns around Sweden, Walpurgis night is about a mountainous bonfire and a huge crowd, perhaps alongside a choir singing the traditional Swedish ditty 'Vintern Rasat Ut'. These spectacles are usually organized by the local municipality. It’s a great chance to spend some time with other members of your community, many of whom take the occasion to come out of hibernation and gather, singing Swedish folk songs and dancing. The bonfire also helps the Swedes keep warm as nights remain chilly at this time of year.

Where are the best places to go?

The most exciting action in Sweden occurs in the nation’s student cities, especially Lund in the south and Uppsala, just north of Stockholm, where revellers take the good weather with a good dose of extreme madness before they hunker down to revise for their summer exams. In Uppsala, this is especially true. People flock from far and wide for the biggest street-party of the year, where students let loose and lose their winter inhibitions and clothes for the first time of the year. In Lund, most of the celebrations tend to be confined to the town's main park Stadsparken, where students also let loose, but at least in one space. Stadsparken in Lund. The not-yet-lit bonfire can be seen in the background. Photo: Johan Nilsson/TT

What is there to see apart from a big fire then?

For many students, the day begins with a champagne breakfast, which inevitably ends up with more champagne splashed around the rooms of the student nations than in champagne glasses. In Uppsala, thousands of eager residents then squeeze up along the walls of the little Fyris River to catch a glimpse of the 100 or so homemade rafts that students have decorated and painted specifically for the event.

With the two miniature waterfalls along the river, half the fun is watching to see if the ‘sailors’ manage to keep dry, or indeed, if the rafts keep in one piece at all. When the waters have calmed and the crowd has moved on, thousands gather in a boozy meeting in one of the city’s bigger parks, seeing in the warmer weather with loud music, dancing, and wild student antics.

In Lund, you bring a blanket, friends, something to drink and then spend the day and evening in Stadsparken.

In the Swedish capital, the open-air museum Skansen is one of the most coveted venues. It puts on singing and music spectacles next to a giant bonfire, which will be lit at 9pm.

Nema Problema, an NGO that focuses on integration, is also throwing a Walpurgis party this Sunday, in Rålambshovsparken. There will be food, singing and a bonfire. The event starts at 7pm and the fire will be lit at 8.15pm.

IN PICTURES: What does the Uppsala boat race look like? Fireworks are also a common sight around the country and if you're passed a strange-coloured hot liquid, it is probably nettle soup. The weeds pop up when the snow melts in Sweden, but provide a healthy warm snack to keep Swedes' energy levels up throughout the celebrations.