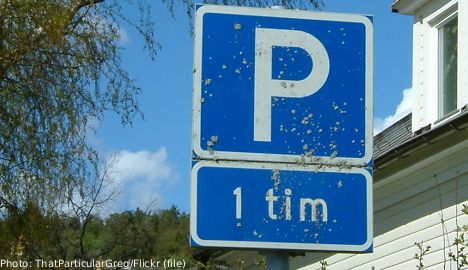 Thomas Allander parked his car legally on Arkadvägen, a street in suburban Stockholm near his office, and has done so since the summer of 2010.

Nevertheless, traffic authorities have on five occasions expressed their disapproval with how Allander parked his car, wrote the Dagens Nyheter newspaper (DN).

“I got fines time after time,” Allander told the paper.

“It’s impossible to comprehend how you’re supposed to park here.”

Allander claims to have first parked on the side of the street with no signs indicated that doing so is prohibited, yet still was fined.

He complained, had the fine rescinded, and a sign was eventually erected.

Not long after, however, he parked on the other side of the road, yet got the same treatment.

Police who inspected the site agreed that Allander should not have been fined, however he was still required to pay the fee.

Since, he has received two more fines for a dispute about whether a “curve” on the street was a legal parking place or not. Authorities have claimed that the rules are clear, however have somewhat altered them for this specific street in light of complaints.

But while the rules were changed on paper, no street signs were put in place, and no one alerted Allander, resulting in fine number five.

He received a letter of apology from the traffic controllers along with this fifth fine. The letter contained a reimbursement of 500 kronor ($74), which Allander claims does not even nearly cover his expenses.

Allander has reported the city to the Parliamentary Ombudsman (Justitieombudsmannen – JO), but has since learnt that his effort was inadmissible.

“That the JO reacts like this is ominous. I don’t understand why they change a few letters of the regulations instead of putting up clear signage. I think they should write off the last ticket,” he told DN.

“I also think that all who receive erroneous fines and get forced to pay out money for months should receive compensation and an apology.”