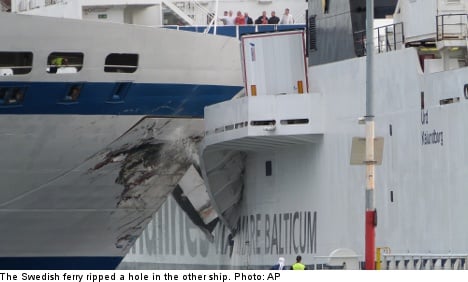 The TT-Lines ferry Nils Holdersson rammed into the side of the Urd, a ferry operated by Scandlines, ripping a hole in the Urd’s hull.

No injuries were reported, however.

She said that there were 63 passengers and around 50 crew members onboard the combined passenger and freight ferry Nils Holgersson when it collided with the Urd around 6.15pm on Thursday evening.

“There was a hole in the hull and some water came in, but fire crews went onboard and pumped out the water,” a Scandlines spokesperson told TT.

The Urd, which shuttles cargo between Travemünde and the Latvian port of Ventspils, is set to be examined by German maritime authorities.

It also remains unclear the extent to which TT-Lines passenger ferry traffic between Germany and Sweden will be disrupted a result of the accident.

Jönsson explained that she was unaware as to what sort of physical damage the TT-Lines ferry may have suffered.

However, passengers who had planned on taking the Nils Holgersson back from Germany will be able to instead take the TT-Lines ferry Robin Hood/Nils Dacke, which departs from Travemünde at 2.30am on Sunday morning.