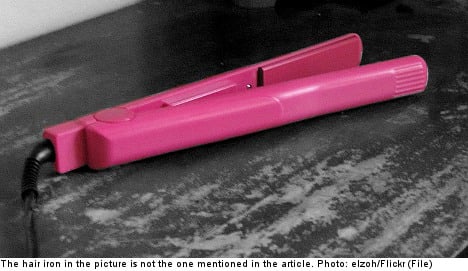 The hair-raising episode unfolded in January 2011 when the 31-year-old man got drunk with his ex-girlfriend and another female acquaintance in a flat in Halmstad in western Sweden.

As his ex-girlfriend sat on the couch straightening her hair, the man suddenly asked to have his penis “straightened”, wanting her to place the hair iron around his sex organ, the local Hallands Posten newspaper reported.

“Do it, do it, do it,” the man said, according to the woman’s statement to police.

While the woman at first resisted, she eventually grew tired of the 31-year-old continually grabbing his penis and waving it around in the air and decided to give the man’s member a scorching squeeze with her warmed-up flat iron.

Following the “stupid” stunt, the 31-year-old simply laughed and asked the other woman for some ice.

He later testified in court, however, that having his penis pressed in a scalding-hot hair iron left him suffering in pain for nearly three weeks after the incident.

A few hours following the sex-organ squeeze, the drunken 31-year-old then got in an argument with his ex-girlfriend, who eventually slapped him, prompting the man to head-butt her so hard she tumbled down to the floor.

He then proceeded to hit her repeatedly in the face, resulting in an assault charge also being filed against him.

The man claimed that violent reaction to the slap was simply a reflexive response.

He explained that his hard life had required him to develop such survival instincts, without which he’d likely be dead.

In issuing its ruling on the case, the court found that since the man had asked the woman to put his penis in the hair iron in the first place, she could hardly be culpable in the caper.

While the court acquitted the hot-iron wielding woman, it nevertheless found the 31-year-old guilty of assault for the vicious head-butt which took place later in the evening.