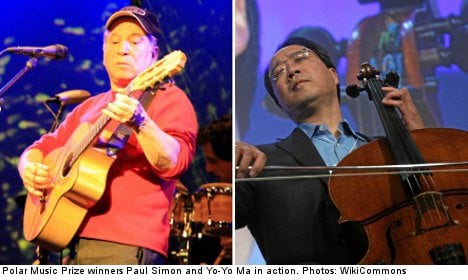 The winners will receive 1 million kronor ($146,441) each and will formally accept the prize from Sweden’s King Carl XVI Gustaf at a ceremony in Stockholm on August 28th.

Paul Simon was honoured for his skills as a “world-class songwriter”.

“With consummate skill, innovative arrangements and provocative lyrics that never fail to capture the currents of his age, Paul Simon has compiled a library of songs which will remain open to future generations,” the organization said in a statement.

Simon, 70, shot to international fame in the 1960s as half of the “Simon and Garfunkel” duo, penning several number one hits as well as highly acclaimed albums.

He split from the group at their peak and pursued a successful solo career, most notably teaming up with the Ladysmith Black Mbazo group to record the hit album Graceland in 1986.

Ma, who the organization hails as “the leading cellist of our time”, was honoured for untiting people from every continent with his music.

“Yo-Yo Ma is living proof that music is communication, passion and the ability to share experience,” the organization said.

Ma, 56, a French-born Chinese American, is a multi-award winning cellist and orchestral composer. He reportedly began playing the cello at the age of four, and is currently considered among the cello greats of the modern age.

The Polar Music Prize was founded in 1989 by the late Stig Anderson, the publisher, lyricist and manager of iconic Swedish pop group Abba, and is given out to recognise artists’ contribution to music. The prize is typically shared by a pop artist and a classical musician.

The 2011 award went to US poet and musician Patti Smith along with US string quartet Kronos Quartet.