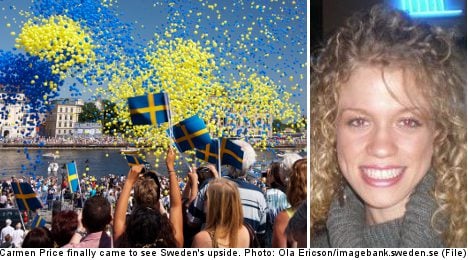 There seem to be two reasons Americans end up in Sweden: a marriage to Ericsson or a civil union with a Swede. I belong to the latter group, which is not an easy place to be for those of us from the land of the free and the home of the brave.

In addition to the already annoying task of explaining to my family and friends that life on the other side of the Atlantic is not one long day spent chain-smoking in a Paris cafe or running with bulls in Pamplona (thank you for ruining my life, Mr. Hemingway), I now have to try and describe the concept of co-habiting with your partner (“samboende”).

I don’t think my parents (or myself for that matter) have been able to get a firm grasp on this idea at all.

It’s alright though – maybe in another ten years, couple of Stadsauktion bids and two strategically-planned children later, my boyfriend and I might actually sound the wedding bells and sort out all of the confusion.

But beyond the nuances of cohabitation, Sweden presents a special set of challenges to even the bravest of American expats.

First of all, many Americans really don’t know a darn thing about the country, except that it is either a socialist paradise (according to the hordes of liberal trust fund Yanks flocking to Europe under the ‘poor’ bohemian guise) or socialist hell hole (as described by your average Tea Party protestor).

And the fact that neither term applies doesn’t really matter to us anyway – Americans like to see things in big, essentialist pictures – without fact checking.

And I should have done some more fact checking before I got on the plane to Arlanda.

Because I had been living in Berlin for two years prior to my move, I committed a major American faux-pas before arriving in Stockholm: imagining Europe as a monoculture.

As in, Germany, Sweden… meh what’s the difference? The language?

Incidentally, this crime goes both ways, since many Europeans seem to think that America is one large ice cream scoop of Jersey Shore sprinkled with guns, Cops, and Hollywood Boulevard…with a dollop of conservatism on top.

I am being a bit hard on all of us, but I am not going to lie: in terms of cultural adjustment, I just assumed Sweden might be only a little bit more difficult for me – a colder, quieter version of my life in Berlin.

And I was very wrong.

It took a few months, but it slowly began to dawn on me that I had misjudged the Swedish beast.

I began to realize that people did not want to argue with me (and arguing is so much fun!), people were not really going to help me learn the language, and people were not looking for new friends.

I also discovered that sartorial and ideological conformity were at an all-time high, people had very strange ideas about gender, and it was really, really dark in the winter.

In other words, the general clichés about Swedish culture actually began to take a toll on my American spirit.

I felt lonely and utterly out of place. I started to feel like a dog backed into a corner and found myself melting down for the most inane reasons.

I knew that I had gotten close to the end of my rope when, in the throes of strep throat, Swedish emergency care turned me away and I burst into an endless river of tears, blubbering on and on about how the Swedes didn’t want me here and how universal health care is evil.

My poor, poor sambo (who has been nothing short of magnificent about all of this by the way).

For the sake of our relationship, my sanity, and the neighbours, I needed to make some changes. I needed to find a way to become a better person and thanks to my socialization in the American culture of self-help, I decided to do some Chicken soup soul-searching.

And here is what I found.

Surprise! It wasn’t actually Sweden’s fault. I was suffering from a major case of American narcissism. That’s right, my stars and stripes Super-ego was spinning way out of control. I was erecting American cultural defense mechanisms left and right in order to avoid self-introspection and humility.

Instead of questioning my own thoughts and values, I was branding all things Swedish as terrible out of my own sense of fear and isolation.

Granted, Sweden is far from the easiest place in the world to live from a social vantage point – but I have yet to meet a Swede who doesn’t admit this fact.

If they can admit to their own flaws, then I should be able to do the same because America is teeming with them, from our continued and unapologetic poisoning of the atmosphere to our strange interest in war-mongering instead of taking care of our own compatriots in need.

Admitting your own shortcomings is definitely cathartic and catharsis opens up room for change and growth, so I took what is perhaps the best part of the American character, optimism, and put it to good use by turning the Swedish negatives into positives.

Instead of complaining that Swedes don’t like to argue, I started to see the value peaceful, non-confrontational approaches to discourse.

Instead of complaining that Swedes don’t want to teach me Swedish, I started to try that much harder to learn it myself.

Instead of complaining that Swedes don’t want to find new friends, I started to see the value in slowly building trust towards long-term, intimate friendships.

Instead of complaining about sartorial and ideological conformity, I started to see the value in consensus.

Instead of complaining about the dark winters, I started to see the value in sunny winter vacations.

Instead of complaining about the radical gender ideas, I started to see the value in challenging my own conceptions of what it means to be male or female (but I will NEVER concede to “hen” – that is still plain ridiculous. We all have our limits.)

Yep, I have a new outlook on life in the land of Gustav Vasa.

And concentrating on the positives is actually making me genuinely happy, imbibing me with a new sense of enthusiasm and saving my relationship.

It simply means viewing the world through a different lens, an activity that can only ever augment all of us for the better (Americans in particular).

Of course there are some things I will never understand or even pretend to like – blodpudding, a general lack of critical thinking (because the state said so!) and the dreaded moms value added tax come to mind.

However, as an expat you always have the choice to sink or swim and swimming in one of Sweden’s many perfect lakes on one of its many perfect summer days beats drowning in self-pitying and closed-mindedness anytime and anyplace.

Carmen Price is a American freelance writer and former Fulbright fellow based in Stockholm.