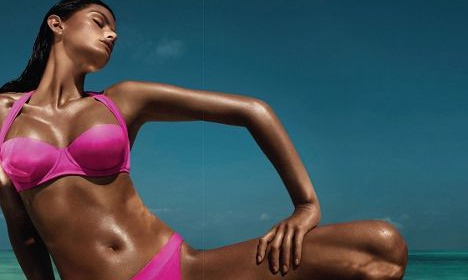 The adverts – which portray brightly coloured swimwear on a heavily tanned model – have caused consternation in the world media in the countries featuring the adverts.

A cancer awareness organization in Switzerland, which also shows the ad, has slammed the retailer, claiming that their adverts have undermined their own advertising.

H&M have defended the campaign by saying that they had chosen a model with darker skin in order to best show the strong colours on sale this season.

“The model in the swimwear campaign is called Isabeli Fontana and she is Brazilian, which means that she has a darker skin tone than most Europeans,” H&M representatives told The Local.

However, other pictures featuring the model show that her skin tone is nowhere near as deep as the colour portrayed in the latest H&M campaign.

But, representatives have claimed that the model is inspiring, and that skin tone has nothing to do with their focus.

“Of course we think this is an important subject, however the aim with our campaign is to show our swimwear collection, which we think that Isabeli Fontana is doing in a good and inspiring way,” the organization said.

Every year, some 2,800 people in Sweden are diagnosed with malignant melanomas, now one of the most common forms of cancer in Sweden.

Besides Australia, Sweden is the country with the largest percentage of its population struck by the cancer.