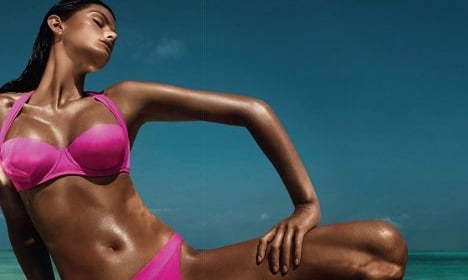 “We are sorry if we have upset anyone with our latest swimwear campaign. It was not our intention to show off a specific ideal or to encourage dangerous behaviour, but was instead to show off our latest summer collection,” the company said in an email sent to AFP.

“We have taken note of the views and will continue to discuss this internally ahead of future campaigns,” it added.

When speaking with The Local on Wednesday, H&M had initially defended the ads in the face of criticism from cancer researchers in Switzerland, explaining it had chosen a model with darker skin in order to best show off the swimwear’s bright colours.

“The model in the swimwear campaign is called Isabeli Fontana and she is Brazilian, which means that she has a darker skin tone than most Europeans,” an H&M representative told The Local.

But H&M reversed its stance on the campaign after the Swedish Cancer Society (Cancerfonden) on Thursday blasted the advertisements, which feature Fontana wearing brightly-coloured swimwear accentuated by a dark-brown tan.

“The clothing giant is creating, not least among young people, a beauty ideal that is deadly,” the cancer society wrote in an opinion piece in the Dagens Nyheter (DN) newspaper on Thursday.

“Every year, more people die in Sweden of (skin cancer) than in traffic accidents, and the main cause is too much sunning,” the group said.

“Regardless of how the H&M model got her tan, through sunning or a computer programme, the effect is the same: H&M tells us we should be very tan on the beach,” it said.

“It is sad to write this, but H&M will through its latest advertising campaign not only sell more bathing suits but also contribute to more people dying from skin cancer.”

The adverts were slammed earlier in the week by a cancer awareness groups in Switzerland which reacted negatively to the use of Fontana bronzed body.

“Many people, especially the young, will try to emulate this and will try to be just as brown, although with some skin types it is just not possible,” Dr. Ralph Braun, from the Early Skin Cancer Centre at Zurich University Hospital, told online news site 20 Minuten.

Even former Miss Switzerland Amanda Ammann, who has previously suffered from skin cancer, joined in the criticism.

“I think it’s a shame, because such advertising gives the wrong impression. People will try to imitate this unrealistic ideal,” she told 20 Minuten.

H&M has previously come under fire for using very thin models in its advertising campaigns.