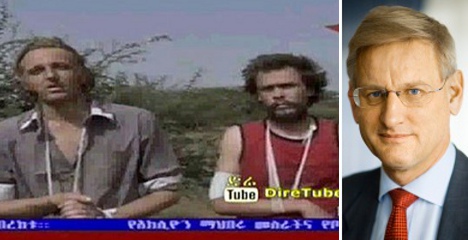 Bildt met on Friday morning with Johan Persson and Martin Schibbye, the two Swedish journalists who were convicted and sentenced to 11 years in prison in December 2011 for supporting terrorism and entering the country illegally.

“We basically had a very good conversation. The conditions are tough, but they’re doing well under the circumstances,” Bildt told the TT news agency after the meeting.

“They insisted that news of my visit should come out. They see it as a signal of strong support for them both in Sweden and in Ethiopia.”

The meeting lasted about an hour and took place in the office of the prison director where the two Swedish journalists are being held.

According to Bildt, the meeting was a surprise for the Swedes because they didn’t know he was in the country.

Bildt was in Ethiopia attending a World Economic Forum on Africa meeting, and while Persson and Schibbye watched some of the proceedings on television, they hadn’t seen any Swedish representatives among the conference participants.

According to Bildt, his participation in the meeting was simply a pretext to secure a meeting with prime minister Zenawi.

Despite Bildt’s request for a meeting being issued on somewhat short notice, the two did hold a meeting on Thursday during which they discussed the case of the imprisoned Swedes.

“It was clear it was a priority for him to meet me in front of the other African leaders,” Bildt told TT.

Bildt explained that the meeting with Zenawi was meant to “establish a good relationship”.

“A good relationship is a precondition for a good solution,” he said.

During the meeting with the Ethiopian leader, Bildt once again emphasized Sweden’s position on the case of Persson and Schibbye but didn’t present any new requests.

He also refused to speculate on when or whether a request for a pardon would be filed on behalf of the two Swedes, nor on when they might eventually be released.

“I don’t dare speculate. I don’t think that would be wise,” he said.