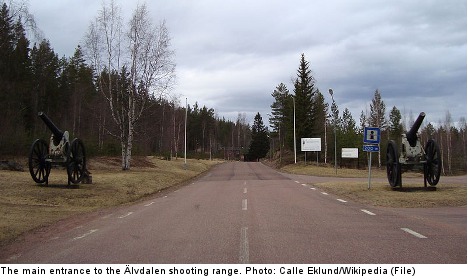 The nature enthusiasts, who reportedly hailed from the Stockholm area, then decided to drive around road barriers set up to prevent unauthorized visitors from entering the the Älvdalen shooting range.

“They had stopped and read that it was a restricted area, but decided that it probably wasn’t so dangerous,” Lars Alvin, head of security at the shooting range, told DT.

“It’s extremely dangerous on the other side of the road blocks.”

At the time of the intrusion, the range was being used by troops from an amphibious regiment based in Vaxholm outside Stockholm who were honing their grenade launcher firing skills.

Shortly after the campers entered the area, the live-fire exercise was stopped and helicopters dispatched to locate the offending vehicle.

Authorities eventually tracked down the trio of trespassing tourists, who claimed they had hoped to do some camping and fishing, and brought an abrupt end to their plans for enjoying Sweden’s great outdoors.

“We escorted them out, took down their personal information and will report them to the police,” said Alvin.

He added that the Swedish military plans on suing the campers for the 30,000 kronor ($4,200) cost of dispatching the helicopter and for additional costs incurred by interrupting the exercise.