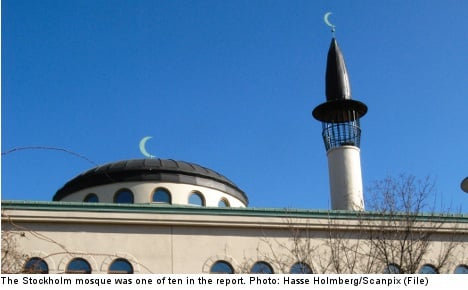 The women then asked leaders at the mosques for advice about how to address issues such as polygamy, assault and non-consensual sex.

Six out of the ten mosques visited by the women, who had also claimed that their husbands had multiple wives, told them that they should nevertheless agree to have sex with their husbands even if they didn’t want to.

Six of the mosques also advised the women against reporting spousal abuse to the police. Leaders at another mosque were divided on the issue, while women received vague advice from yet another mosque.

Only two of the mosques gave the women clear advice directing them to report their abusive husbands to police.

The women were also told by nine of the ten mosques that men had the right – under certain circumstances – to have more than one wife.

Only one mosque told the women that men didn’t have the right to be married to several women at the same time and that their husbands needed to follow Swedish law.

The advice, which in many cases advocated violating Swedish laws, came from imams or family counselors at the mosques.

When “Uppdrag granskning” host Janne Josefsson approached two of the largest mosques featured in the programme to inquire about their official position on matters discussed by the women, the answers he received were totally different than what the women heard.

The chair of the Islamic Association in Uppsala claimed in the story that people should follow Swedish law.

When confronted by what the imam at the Uppsala mosque told the women, the Islamic leader explained that the imam had expressed his personal opinion in urging the women to forgive their abusive husbands rather than report them to police.

The imam with whom the woman met at the mosque in Stockholm defended polygamy and also advised against filing a police report about husbands who beat them.

He suggested instead that the women try to show their husbands more love.

“Don’t refuse to give him love, because then he might change,” said the imam.

Upon seeing the SVT report, however, the board of the Islamic Association in Stockholm (Islamiska förbundet Stockholm) decided to suspend the imam immediately and launch an internal investigation.

“This is a clear breach of Swedish law and they commit professional misconduct in their capacities as imams and associations,” Muhammad Fazlhashemi, a professor and author of books on Muslim intellectual history, told the TT news agency.

Fazlhashemi, who also appears in the SVT report, has reviewed a written transcript of the advice given to the women.

“What these men are saying to the woman violates their human rights. The men demean and insult the women when they say ‘you need to tolerate that these men hit you’,” said Fazlhashemi.

He is highly critical of the imams featured in the SVT report for not following Swedish law.

“Considering the fact that the mosques have received state funding, they have also committed to following Swedish law and the basic principles of democracy,” he said.

Fazlhashemi describes the Muslim leaders featured in the piece as “conservative, letter of the law traditionalists”.

“Now it’s time for some housecleaning. They need to weed out the bad seeds,” he said.

Fazlhashemi, who is also a Muslim, expressed concerns that such outdated mosque representatives benefit Muslim-haters and the far-right Sweden Democrats.

“They confirm the negative picture of Muslims. It’s a real shame that they confirm of the prejudices that Islamophobes have,” he said.