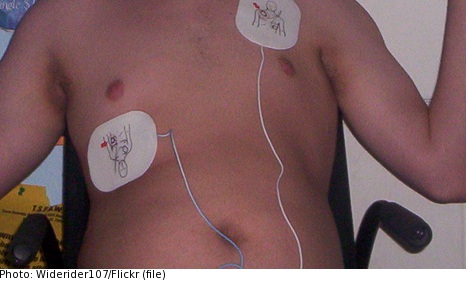 The man in the picture is not the man mentioned in the article.

“It is completely not true,” the head of the clinic told The Local.

According to the report, the clinic staff fastened a number of electrical pads to his stomach and the nurse turned up the machine to full effect and told him she would check on him in ten minutes.

However, very soon after she left, the man started worrying that something was not right. He experienced what he perceived as strong electrical jolts to his stomach, he claimed in his report.

“Areas of my stomach were burned and the rest was red and swollen,” the man wrote.

According to the man, he screamed and shouted incessantly until the machine stopped. Despite this no one came back to check on him. Instead, the machine shut down by itself after 25 minutes.

When he left the beauty salon he felt nauseous and his heart was racing.

Worried about what it meant, the man went straight to a local health clinic where he was treated with painkillers and an ointment against the burns.

The day after, he called the beauty salon to tell them what had happened.

“They had no sympathy but told me that they would refund me my money. They also said that if I reported them I wouldn’t get any money back,” the man wrote in his report.

According to the man, the owner of the clinic told him to come in to be examined by one of the in-house doctors to see if the injuries were as bad as he claimed.

After he had done so, the doctor allegedly confirmed that the injuries were as extensive as the man had claimed and recommended that they paid him some compensation, he claimed in his report.

However, according to the man, the owner refused to pay out any form of recompense. The man then told him he would report the matter to the National Board of Health and Welfare “so that other lives would not be endangered”.

The man also wrote that he is still suffering from the incident, with traces of the injury still on his abdomen and psychological problems following his gruesome experience.

However, according to the clinic, the machine used on the man was a simple muscle stimulation unit, which is commonly used for fat reducing treatments.

When the machine stopped and the staff returned to check on the man he had removed all the pads by himself.

“It wasn’t his first visit either, it was the final treatment of a series of 7-8 visits. We suspect he just wants his money back,” the head of the clinic told The Local.