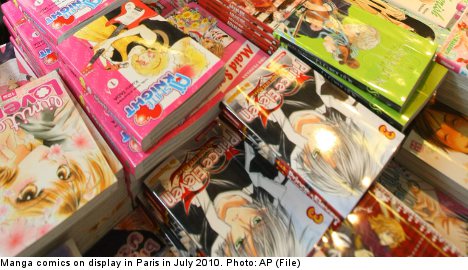 “To me personally this might mean that I am finally cleared. For me as an intelligent human being it would be very interesting to see this absurd law finally being tested in the highest instance,” said Lundström to news agency TT before the negotiations started.

The auditorium was filled to the rafters and several expert witnesses were heard when the final appeal of the case was made.

“These are not real people. The prosecution has a tendency to view these drawings as camouflaged photos, but these are animated fantasies,” said one of the expert witnesses, Johan Höjer, a researcher in comics from the University of Gävle.

Lundström, described by Swedish media as a top manga expert, was found guilty by two lower courts of having 39 drawings portraying figures in sexual poses stored on the hard drive of his computer.

Lundström’s lawyer Leif Silbersky told Swedish news agency TT during a break in proceedings on Wednesday that “this whole case has grown to unreasonable proportions. This is not a crime. This is research.”

But according to Hedvig Trost of the prosecution, it can be hard to draw a line between what is an animation and what is a photograph.

“The ban is there to protect children in general, whether it is real children depicted or not,” she said in court.

The images that the man has been convicted of possessing were shown on large screens in the courtroom. The pastel-coloured pictures showed children in different states of undress.

The depicted persons have large eyes and many other features that are characteristic for manga-characters. They are both posing for the viewer and taking part in different sexual activities.

“The images also show children whose genitals are exposed in a sexual way,” Trost said.

Fredrik Strömberg, chairman of the cartoon association Seriefrämjandet and editor of the comic book Bild och Bubbla, tried to give the court a different interpretation of the 39 drawings.

Strömberg, who has studied manga for over ten years, described one of the images, a character with an enlarged head and large eyes.

“With a western eye the body looks as if the person is very young. But you have to keep in mind that in Japan, the ideals are different; the culture is different,” he said, mentioning the Japanese expression “kawaii”, which means sweet or cute.

“In Japan, kawaii is something that permeates all of society. It is reflected in many characters in comics seem smaller and younger, but it doesn’t mean that they are children,” he told the court.

But Trost argued that the images could be used to coerce children into taking part in sexual activities. She questioned the motive for the man possessing the images, which he has claimed was for work purposes, and stressed that the man wasn’t working on translating the images in question.

“And even a drawing could be of a real child. A photo depicting a real child could have been used to make the drawing. It is hard from the outside to know whether there is an original photo or not,” she said in closing.

The hearing was concluded shortly after 1pm on Wednesday and the verdict will be given “in a few weeks”, according to the court.