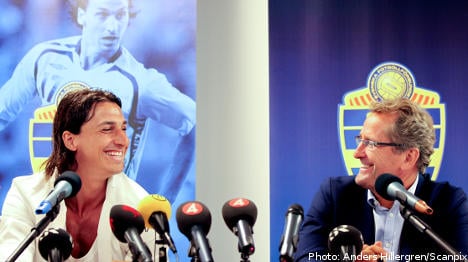 Sweden failed to qualify for the 2010 World Cup, leading to Lagerbäck’s

At the time, football fans and media in Sweden were despondent: not only were they not going to a major tournament — a rarity over the last 20 years — but they were hardly being entertained on the field either.

Lagerbäck’s defensive approach was unpopular and as it didn’t work, Swedes were praying for something else.

Hamrén’s appointment ushered in a mini-revolution.

The 54-year-old began by convincing Ibrahimovic to end his international exile before it even began, promising the popular AC Milan striker greater support in attack.

No longer would “Ibra” be an isolated and frustrated lone figure up front, starved of the ball and an opportunity to show his skills, fuelling critics who insist the 30-year-old cannot cut it at the very top.

Out, also, went defensive-minded midfielders and in came energetic players with a desire to push forward.

Hamrén was bold and outspoken, causing a stir by insisting that his team would attack and try to dominate possession against the Netherlands in qualifying for Euro 2012.

It didn’t go to plan — Sweden lost 4-1 in Amsterdam — but the stage was set: this was a new Sweden and they were going to attack.

That policy served them well as they won all but one of their remaining matches, even beating the Netherlands at home in their final group game to qualify directly for the finals as the best-placed runners-up.

Hamrén may be a virtual unknown outside Scandinavia but he has enjoyed a certain amount of success.

He has won the Norwegian title twice with Rosenborg, the Danish title with Aalborg BK and three Swedish Cups, twice with Stockholm’s AIK and once with Gothenburg’s Örgryte IS.

Three titles and three cups across three different countries is a good record by anyone’s standards and he has also been named manager of the year in both Denmark and Norway.

But while he’s become known for his positive approach on the field, Hamrén is still pragmatic, recognising that with France, England and co-hosts Ukraine in their group, it would be futile to think they’re going to steam-roller their opponents.

“We have to be realistic and accept that we’re now playing the very best teams in Europe, which makes it tougher for a small country like Sweden,” he recently told the Swedish press.

“We’ll try to win and we’ll try to do it with as positive and attack-minded play as possible. But it will depend on how strong our opponents are.”