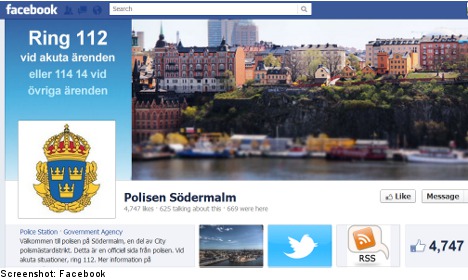 The use of social media channels to gather tips and information is common practice for many police departments in Sweden.

On Monday, police for the Södermalm district of Stockholm posted a plea on its Facebook page for information about several suspected criminals, the Dagens Nyheter (DN) newspaper reported.

“Do you know these men?” read the posting, which also included a link back to the police’s homepage, which included images and video clips taken from surveillance camera footage of several young men suspected in an aggravated assault.

Following the posting, which attracted several racist comments which remained on the police’s Facebook page for at least a day, the Swedish Bar Association slammed the Stockholm police’s use of social media in its police work.

“There is an incredibly huge risk that the people shown here are innocent. You have to remember that people are innocent until they’ve been convicted in a court,” bar association head Anne Ramberg told DN.

“We don’t know that they’ve committed the act. They may simply be witnesses…but to then spread this via social media can have unforeseen consequences. The fact that the young people’s immigrant background prompts a discussion like that doesn’t make it any better.”

It didn’t take long before Monday’s Facebook posting by the Stockholm police attracted comments from the account’s roughly 4,700 followers about the young men’s skin colour and background.

While an administrator of the police’s Facebook account published a post urging commenters to watch their language, the racist comments weren’t erased until after the police had been contacted by DN.

“It’s a real shame that things spiral out of control like that. This is our online bulletin board and we want it to look good. At the same time, it’s not going to be right if go in and filter things and decide what’s okay and what’s not,” sergeant Robert Kindroth, who administers the account, told the newspaper.

According to DN, the various police districts in Stockholm have a total of 35 different Facebook pages and ten Twitter accounts.