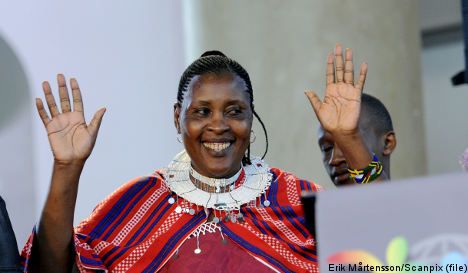 A majority of the some 2.5 million children around the world who took part in the selection of this year’s winner voted to give the 2012 World’s Children’s Prize to Mollel “for her over 20-year struggle for children with disabilities in poor rural areas in northern Tanzania,” organisers said.

“Thanks to Anna and her organisation, Huduma ya Walemavu, thousands of children with disabilities have a chance to live a life with dignity. They get medical care, operations, physiotherapy, therapy, wheelchairs and other aids, the chance to go to school, safety, and love,” they added in a statement.

In all, Mollel and her organisation have since 1990 helped some 12,500 children belonging to the semi-nomadic Masaai people, who live in Kenya and northern Tanzania, the prize jury said.

“These are children who would have been neglected, abandoned and could even have died if it hadn’t been for Anna’s struggle for their rights,” it stressed.

Mollel and two runners-up will receive their awards, worth a total of $100,000 at the Gripsholm Castle, west of Stockholm, on Wednesday evening in the presence of Sweden’s Queen Silvia and children from 15 countries.

The World’s Children’s Prize was founded in Sweden in 2000 and is today supported by around 58,000 schools with 27 million students from 107 countries.